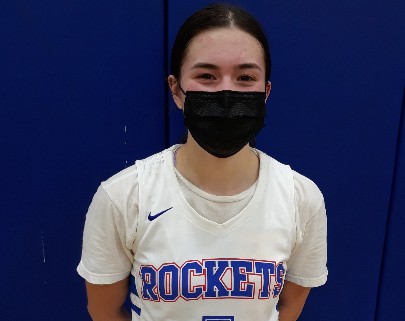 Due to the nature of the pandemic, some basketball programs have a limited number of participating student-athletes. The result is the cancellation of lower levels (JV & Frosh) and earlier varsity tip-off times. This game tipped off at 4PM, and it was a treat being able to cover a game at the high school that Arizona Legend and Former NBA Player Richard Jefferson played at.

The second half opened up to where the Lady Rockets started to move the ball better for quality shots, which built as much as an 8-point lead. The Lady Bears clawed back with a pressuring defense, looking to push the ball in transition off of turnovers. However, their shots were not dropping.

In the Fourth Quarter, the Lady Bears caught a few breaks off of causing turnovers with their half-court trap - cutting the lead to as close as 2 points. Then Moon Valley point guard Yvette Ruiz (pictured) took over by slowing the tempo down.

In the end, Moon Valley pulled away in the final minutes downing Bradshaw Mountain 47-41.

Who really stood out for Moon Valley from the tip off was 5-foot-6 senior point guard Yvette Ruiz, daughter of longtime AIA official Jose Ruiz. Ruiz impressed me with her ability to control the tempo of the game. She is a superior defender that can defend all (5) positions, even against bigger and stronger opponents. I believe she will be a huge asset to any college program, because she also can score at all three levels (inside, mid-range, and perimeter), as well as the decision making and vision to get her teammates involved. Ruiz went on to lead all scorers with 18 points.

The second of Moon Valley’s 1-2 punch was 5-foot-7 sophomore forward Kyamari Smith. Smith provided an inside presence on both ends of the floor. She has nice post skills with a nice drop step. She also has a good motor and an elite ability to clean the glass.

Despite the loss, Bradshaw Mountain has a lot of talented hidden gem prospects. 5-foot-9 senior wing Sierra Woolley led her team in scoring with 11 points. She has great footwork, low-post scoring ability and cleans the glass well.

5-foot-5 senior guard Brinlee Kidd played hard. She was quick and pressured the ball well on defense, and displayed an elite ability to move without the ball, by cutting to open spots or towards the basket.

5-foot-8 junior forward Kacie Clinton, is a very athletic and physical player. Her play reminded me of former Florence High School prospect, Kayla Furman, who currently plays for Arizona Christian University. We first discovered Clinton at our Arizona Preps Academy in Prescott Valley this past November. Clinton shows an elite ability to rebound. She is very aggressive on both ends of the floor, and, with more development, could be a nice prospect in the future.

This was a great game to cover. The lady student-athletes displayed a lot of passion for the game, and we at Arizona Preps look to bring greater coverage of girls basketball in the up-and-coming weeks.