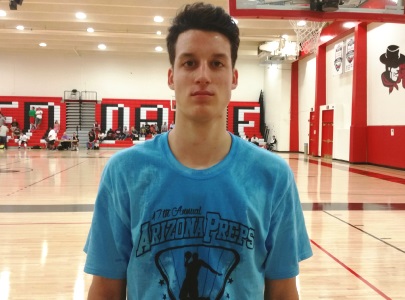 Moon Valley High School just happens to be my alma mater and I had been back to see the Moon Valley Rockets win a state playoff game since former stars Mark Murphy and Richard Jefferson graced the school's hardwood.   The once terrific basketball program has seen some tough years, but this year's team gives the program their best chance of winning in many years.

Both teams came into the game fired up with intensity and very nervous.  So nervous that they would both struggle from the field imensely - scoring only a total of 53 points for both teams after three periods.  Moon Valley went into the fourth period with a narrow and low-scoring 28-25 lead.  In fact, I have never seen this before but neither team would score in the third period! Wow.

The fourth period would define the game, as Bryce Cheney and 6-foot-7 sophomore post Jok Jok would make their presence felt in the game for the Rockets.  Moon Valley would quickly begin to pull away from Cholla behind two quick baskets from Cheney - two strong drives to the basket around defenders.  With 2:46 left to play in the game, Moon Valley had built a 42-32 lead.  After a nice three-point play and another basket in transition by Jok Jok , while Cholla would misfire consistently from three-point distance, Moon Valley would walk away with a nice 50-38 victory.

Moon Valley will now move on to face #2 seeded Snowflake High School in the second round of this year's D-III state playoffs on Friday.