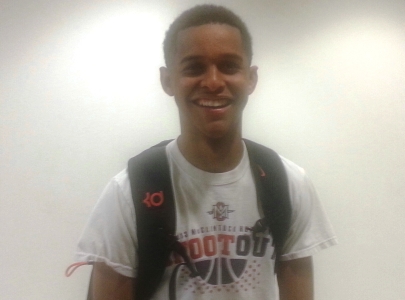 It has been a great week for my former schools.  First my alma mater, Madison Meadows Jr. High, won this year's conference championship and went undefeated, and then I had an opportunity on Thursday evening to observe my high school alma mater, the Moon Valley Rockets, compete on the road at Arcadia High School (18-8).

Moon Valley (13-9) came into the game as winners of 3 of their last 4 games on the season, and looking to build some momentum before the state playoffs.  The Rockets team is now fully healthy and playing their best basketball of the season, and at the right time of the season.

Head coach Matt Elliot and his staff are confident that this team is capable of making some noise late this season, and Thursday night's game would be a great indication of how good the Rockets can be, as they would face a competitive Arcadia team, led by the play of high-scoring 6-foot-5 senior forward Connor Nichols and 6-foot-4 senior Avonte Nelms.

'We played a triangle-and-2 against them to slow them down," said Moon Valley HS assistant coach Carlos Contreras after the game.

The defensive maneuver would work, as the Rockets would slow both players down in the game's first half.  Nichols, who has had high games of 40 points this season in multiple games, would not get his first field goal until the second period.  Nichols would finish with 4 points in the first half, while Nelms would collect a game-high 11 first-half points.  Arcadia would take a 29 to 28 halftime lead.

Arcadia would build a nice 14-point advantage in the third period, behind the play of Nichols, but then the Rockets would storm back late in the game to turn things around.

With 2:16 left to play in the game, 6-foot-3 senior guard DJ Lujan would convert a nice driving basket in the lane to give the Rockets a 66-65 lead.

After a basket inside by Nichols, with 1:50 left to play, 5-foot-11 senior Isaiah Elliott-Ortega (pictured) would knock down an impressive three-pointer from the wing to tie the game at 68 all.  Then, with 1:21 left to play, this same young man would get the basketball in his hands with a defender in front of him, and fire a three-pointer without blinking.  The ball would swish through the rim and the 3-point basket would give the Rockets a two-point advantage - 71-69.

Avonte Nelms would get fouled inside and convert both free-throws to tie the score at 71 all with a minute left to play in regulation.

With just seconds on the clock and Moon Valley down by one-point, 72-71, DJ Lujan would drive the basketball into the lane and finish on a strong driving play to give his team the lead, 73-72.  Arcadia would fail to get a shot off in the final :09 seconds of the game, and the Rockets would win a big road victory for themselves, just before the start to this year's state playoffs.

Arcadia will now advance to next week's Sectional Playoffs, while Moon Valley will sit out the sectionals, but will advance to the Division-II state playoffs.