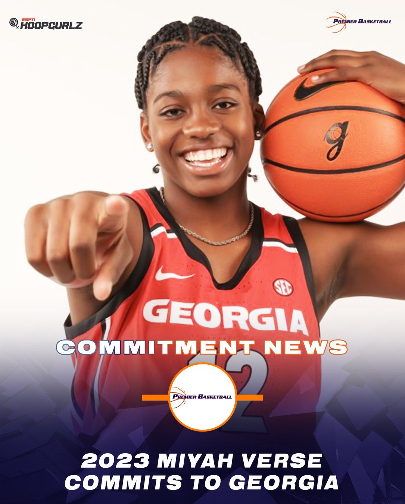 The wait is finally over for one of the top overall girls prospects in America's 2023 Class, as many prospects around the country are giving their commitments to the respective college programs of their choices. Mountain Ridge High School's super athletic 6-foot-1 senior forward Miyah Verse is one of the top overall 2023 prospects in the country, and is our #2 overall girls prospect in the state's 2023 Class. After a long recruiting process for herself, where college programs looked to position themselves with her in her college recruitment, Verse has now made her college decision - announcing her decision this weekend to play for the University of Georgia and Head Coach Katie Abrahamson-Henderson and her women's basketball staff.

Verse is one of the top overall girl's prospects in the West for the 2023 Class, and she received loads of college recruitment as a result. Verse has had a terrific high school career for herself, and many Division-I programs looked to ultimately land her, as a result. After receiving numerous high-major Division-I offers for herself, Verse has now landed at the University of Georgia, and she will now take her talents to the SEC Conference.

Verse had began her playing career for the Arizona Elite, while taking classes at Mountain Ridge High School. The Arizona Elite program, which was absolutely loaded with talent, has now closed down, and so Verse and her teammates have now decided to play for their different respective high school programs around the state. Verse is an excellent student, and will look to have a big senior season this year at Mountain Ridge, leading a very talented ball club in her final year of high school basketball.

Verse is a tremendous athlete at 6-1 in height and is very strong physically - actually able to dunk the basketball in impressive fashion, and taking women's athleticism to another level in the Arizona high school and prep school ranks. She is a versatile prospect that can play multiple positions, and has worked very hard on her overall skill level and feel for the game. She works currently with former Arizona basketball standout Royce Woolridge, and has seen considerable improvement in her play as a result, which will benefit her nicely over time as she matures and competes against better national competition.

Verse is a strong driver and finisher of the basketball, as a result of the tremendous aggression that she plays with. She can score inside and out, and gets to the free-throw line quite often, as she does not mind physical contact. In fact, she relishes it and plays with an excellent motor, which is glaring and contagious for her teammates. Verse is a good ball handler in the open floor, where she likes to make plays for herself and her teammates, and is improving in her ability to shoot the basketball with better range on her shot. She is a very strong rebounder and finisher around the basket, and will be able to play immediately at the collegiate level, as a result of her physicality as a player. As she continues to develop offensively, this young lady should be able to become a professional over time.

Miyah Verse has no limits as to how good she can become over time, as there are very few prospects in America that have her sheer athleticism and ability to develop as a player. She has a very high ceiling, and I believe she is very underrated as a college prospect nationally. Currently, she is rated as the #100 prospect in the country by ESPN.

Verse will sign her national letter of intent with the University of Georgia next month, during the NCAA Early Fall Signing Period.

Congratulations to Verse and her family on this amazing accomplishment, and good luck to her from our Arizona Preps' staff this senior season and in her amazing future ahead.