Miyah Verse Above The Rim 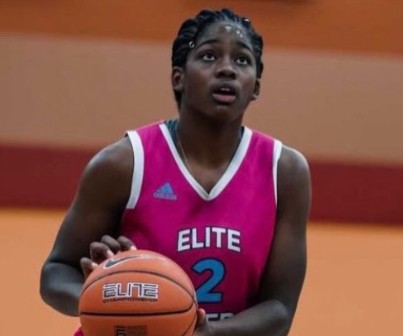 Miyah Verse is a 15-year old sophomore that plays for the Arizona Elite. She is among the state's elite-level talents and is on the rise in the state, after averaging 13.5 points and 9.7 rebounds per/game as a freshman. That’s the plain, on paper stats that many like to talk about when talking about an athlete. Well I wanted to meet Miyah and see her on the court before putting pen to paper.

The number of female athletes dunking a basketball are likely counted on less than the (10) fingers I have, and I have yet to see more than one who is currently doing it with such ease.  If that alone doesn’t speak volumes to the upside of this young student-athlete, then let me grab your undivided attention, and then hopefully these next words will.

I reached out to Arizona Elite Coach Brian Porth, and asked about his team and specifically Miyah.  His first words were “Great kid!" said Porth. " Listens, works hard, and is a very coachable team player.  She plays in a style that reminds me of an old school Charles Barkley and Larry Johnson.” To me that’s about as perfect of an answer as I could hope for.  Now very recently I saw a video of Miyah dunking the basketball with EASE, and of course I had to ask was it legit a 10-foot rim, and Coach told me that it sure was.

I’ve had the pleasure now of speaking with Miyah and her parents - wonderful family.  I’ve gotten to see her play recently as Arizona Elite traveled to Bella Vista Prep to play, and although they won handily by the final whistle, I gained so much more insight into her on and off court character, than any scoreboard could tell.

As I walked into the gym I heard the sound of a basketball hitting heavily off the glass. I turned my head to see who missed their shot or layup that badly, and as I turned my head I saw #2 Arizona Elite ABOVE THE RIM for the intended off the glass pass for a dunk!  Now I’ve been around the game for a long time whether playing, watching or coaching, and it’s extremely rare for me to see that kind of display of not only athleticism, but also grace and power.

The game got underway and Miyah was (1) of just (5) players coach Porth had available for play that day, so all 5 girls played the entire game and pushed the tempo with no signs of needing a break to catch their breath.  Miyah and the other girls spread the ball around and all ended up with nice stats, but most importantly played together for the win.  Miyah knocked down several mid-range jumpers, had solid box outs and also explosive elevation off of the box out for the rebound - displaying what coach Porth called “her newest tool,” which was a spin move off of the dribble to the hoop.