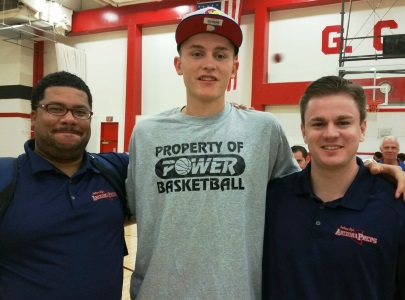 Gilbert Christian High School's athletic and talented 6-foot-9, 210-pound senior post Mitch Lightfoot is the state's top overall prospect in the 2016 class, and it showed as he drew significant college recruiting interest from some of the elite college programs in America.  For Lightfoot and his family, it was the most important decision of his young life, and with the full support of his family, his club program, our staff at Arizona Preps and the Arizona basketball community, Lightfoot made his decision on Saturday in front of a packed house at this year's 17th Annual Arizona Preps Fall Showcase!

In front of a large number of scouts and media in attendance, Lightfoot chose to elect for one of the nation's premier college basketball programs and return back to his hometown - choosing the University of Kansas and head coach Bill Self and his staff.

Kansas assistant coach Norm Roberts was very instrumental in the college recruitment of Lightfoot, and worked hard to land the athletic post talent.  According to Lightfoot's club coach John Ortega, the nation's premier junior college scout and valley resident, Jerry Mullens, was responsible for helping get the Jayhawk's program involved in recruiting Lightfoot.

Lightfoot took each of his five recruiting visits before making his decision - one of the biggest decisions in Arizona high school basketball history.  Lightfoot chose Kansas over his other four final schools - Arizona, Stanford, Utah and St. John's.

Lightfoot has been the state's top recruited prospect in the 2016 class, and one of the top prospects in the West, for some time.  Lightfoot is coming off a very good spring and summer performance, where he earned significant high-major division-I interest from around the country.  As a result, Lightfoot decided to take official recruiting visits to five different schools this fall before reaching his decision.

Congratulations to Mitch Lightfoot, his family, Gilbert Christian High School and their basketball staff and the Arizona Power club program on this amazing and immense decision from our Arizona Preps staff!

Arizona Hoop Review Scouting Report:  Lightfoot is a very nice talent with broad shoulders and a nice physical frame that should add weight very nicely over time.  In fact, Lightfoot will easily be able to add 20-30 pounds of muscle to his now thin frame over time – a fact that will take his game to a completely different level over the next 3 to 4 years.  He already possesses a strong feel for the game and a nice overall skillset, which allows him to make plays inside the post or from the perimeter, where he has developed a great deal over the past year.  He is very athletic for a player his size and has excellent explosion off the ground - allowing him to finish very strong at the rim.  He dunks the basketball very well and plays well above the rim.  Lightfoot also has a mean streak in him, which allows him to raise his game to the level of his competition - a very nice attribute.   Lightfoot has really developed his perimeter touch, but more consistency from the perimeter will open up his entire game.  An active rebounder on both ends of the floor.  More physical strength will take his game to the next level in his ability to rebound against bigger post players.  An excellent shotblocker with good timing and length.  A nice overall prospect with upside.