Millennium Gets Road Victory Over Westview Without Jones 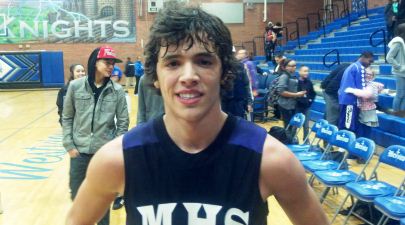 On Tuesday evening, Millennium High School (15-3) and Westview HS (14-6) faced off in what was thought to be a big match-up of two of the state's elite 2014 prospects - Westview's talented 6-foot-8 junior post Andre Adams and Millennium's skilled 6-foot-9 junior low-post prospect Elston Jones.  Instead, the game would look much differently, as Jones would sit out the game with a knee injury - suffered in a previous game.

While Jones would look to return to action in the near future, the match-up with Adams would have to wait for another contest.  On this evening, basketball fans would instead see two teams simply looking to gain an edge on one another in the Division-I standings.

Westview, loaded with overall talent in comparison to other teams in the state, would jump out to a 17-12 first quarter lead, after a basket inside by gifted 6-foot-6 senior forward Airen Randolph.  Westview would hold on to a 19-14 first quarter advantage.

Randolph would continue his strong play in the second period.  After a mid-range jumper from Randolph and another transition lay-up from him, after a long-range outlet pass from Andre Adams, Westview would jump out to a 23-15 lead with 5:42 remaining in the first half.

Millennium though would fight back late in the first half, and, after consecutive baskets from 6-foot-4 senior guard/forward Ramon Franklin, Westview would climb back to within 4 points, 25-21, late in the second period.

Millennium would enter the fourth period with a narrow, 47-45 lead.

Millennium would then take their biggest lead of the game, 53-47, after two free-throws from 6-foot-1 senior guard Jordan Martin and then a steal and a transition lay-up from Martin.

With 2:41 left to play in the game, Millennium would take a big 57-49 lead, after two more free-throws from an an enthusiastic Jordan Martin.

With key members of their team on the bench in the late stages of the game, and while looking to make a comeback, the Westview team would fight to get back in the game.  Andre Adams would convert an offensive rebound and a put-back to bring his Knights to within 3-points, 62-59, with :42 seconds left to play.  But a steal on the inbounds by Millennium's Jordan Martin would seal the game for the Tigers, as they would get the big road win, 68-62.

These two teams will meet again on Monday (1/21) in the exciting MLK Basketball Classic, so we may just get an opportunity to see the Adams/Jones match-up after all.