Millennium Comes From Behind Late Against Pinnacle 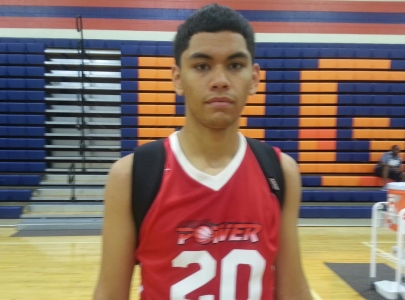 Millennium is also young across the board, and only has one senior on their roster.  The team is led by the play of 6-foot-7, 230-pound junior post Morningstar Takapu (pictured), but the team has struggled this season to consistently get Takapu involved in the offense.  Takapu would struggle again in this game to get involved in the Tigers' offense.

Pinnacle head coach Charlie Wilde has done an excellent job this season of playing many of his young players - helping his young team to gain valuable playing experience throughout the season; something that just help this team down the stretch.  Pinnacle (7-7) would play as many as (10) different players in the game's first half, as they would cruise to a low-scoring, 22-18 first half lead by halftime.

The game would be decided by the third period, as Millennium   would outscore Pinnacle 19 to 8 in the quarter - a deciding factor in the game. Millennium would take a 37-30 lead into the fourth period, behind the play of 5-foot-8 junior guard Habib Arogundade.  Arogundade is a very quick guard prospect with a nice perimeter shooting stroke, and an ability to make plays off the dribble.  While his decision-making can be questionable at times, his play would be enough to create problems for the Pinnacle guards.

In the fourth period, a basket by Arogundade would give Millennium a 39-34 lead with 6 minutes left to play in the game.

Pinnacle would come back after a 22-foot three-pointer from 6-foot-9 senior forward Nick Mains (Air Force commit), and then an offensive put-back from 6-foot-6 senior post A.J. Elliott (Point Loma signee), to pull Pinnacle to within 2-points of Millennium with just over a minute left to play, 41-43.

Millennium though would convert their free-throws late to pull out the nice home win, 50-43, over Pinnacle.  Millennium will now host Agua Fria HS on Saturday at 5PM.

Recruiting Notes:  Millennium HS 6-foot-7 junior post Morningstar Takapu is a nice talent and is regarded among the top overall prospects in Arizona's 2017 class.  I was expecting to see much more from Takapu on Friday evening, as he has a nice ability to score inside and out with a variety of offensive skills.  This young man is regarded by our Arizona Preps' staff as a solid mid-major prospect, but I was very disappointed in his team's ability to find him within the offense on Friday evening.  Takapu is a very unselfish performer and an excellent teammate, but, at some point, he will need to command the basketball from his teammates.  Takapu often ran the floor hard without seeing the basketball, and very seldom got the basketball in a scoring position on the floor a very disappointing fact.  This young man is a very nice talent, but his team will need to rely on him much more to be successful at all this high school season.