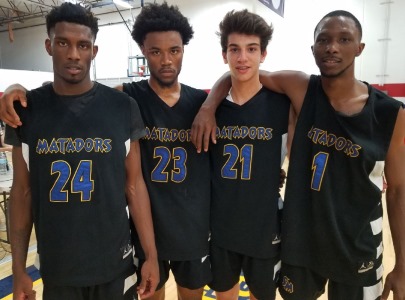 Shadow Mountain High School has been the absolute class of the state of Arizona for the past decade, winning just about every state championship under former Head Coach and legendary Arizona basketball product Mike Bibby. After winning the last four-straight 4A State Championships in Arizona (2016 State Title was Division-II Title), the Matadors' basketball program has changed a lot as Bibby decided to resign from the program and focus on other basketball endeavors. As a result, Curtis Millage now takes over the Shadow Mountain program, and has the Matadors focused on winning another state title.

Millage, who played for Arizona State University between 2001-2003, played professionally for (14) years overseas, and was extremely successful in his basketball career. Recently, Millage was an assistant coach at Chandler-Gilbert Junior College under hard-working Head Coach Steve Silsby. Millage worked very hard as a college player, professional player and also as a college coach to prepare himself for the opportunity he has today now as the head coach of one of the winningest basketball programs in the West.

Shadow Mountain built a serious dynasty in the state of Arizona under Bibby and his experienced basketball staff, which has now moved on to Hillcrest Prep. Millage is focused on building his own brand of basketball at Shadow Mountain - a brand that will be focused on playing hard and defending for 94 feet.

Millage advised me that he is building a new culture at the program, and will also focus on teaching life skills to his student-athletes, the same life skills that helped him to be extremely successful in his basketball career and in his life, as a basketball product of Los Angeles, California.

Morrow has been relied on in the past primarily for defense and rebounding, since Shadow Mountain was led by the overall play of Jaelen House (Arizona State) and Javon Blacksher (Grand Canyon) over the past (4) seasons. This season, Millage has put pressure on Morrow to be a leader on and off the floor for his teammates, and also be the team's primary scorer and offensive weapon this season.

Morrow can plays several positions on the basketball court, which will be a very valuable asset for Millage and his staff this high school season, as he leads a talented group of performers that lack significant playing experience. His best asset as a player, is that Morrow is a lock-down defender and that he is able to defend several positions on the floor at a high level.

Another excellent defender and slasher for Shadow Mountain is 6-foot-3 senior wing Davon Cobbs, who will also provide excellent scoring and overall play this season for Millage and his staff. Cobbs is a do-it-all performer that competes hard and makes plays out of thin air, as a result of the high motor that he plays with. The older brother of Devontes' Cobbs, who is currently playing for Hillcrest Prep, Davon is set to have a big, breakout season for himself and Shadow Mountain this season.

6-foot-3 senior guard Ori Kedeem will also provide excellent shooting and depth for this year's team, as he is a very crafty player that has a very unique skillset. Kedeem can score from all three levels, but what makes him intriguing is his uncanny ability to knock down shots in a variety of ways from all over the floor. He’s very crafty and has a good handle that allows him to create offense. Kedeem will also be relied on heavily this season to provide offense for the Matadors, and he should also see a rise in his college recruitment this spring as a result.

6-foot-4, 180-pound junior do-it-all forward Elijah Cole is another big piece for the Shadow Mountain group this high school season, as he is as versatile a performer as the team has - capable of playing several positions on the floor. Cole is an athletic and tough forward prospect that can defend several positions on the floor, is a strong rebounder and is a strong overall finisher around the basket and in the open floor. I really love this young man's approach to the game, and his intangibles on the court help team's win at a high level.

Overall, this season will be one of major change for the Shadow Mountain basketball program, as they look to carve out a new identity for themselves. One thing is for sure, while the coaching staff will be different, the goal will the same - to win. And not just winning, but winning by playing and defending hard. Not much has really changed .