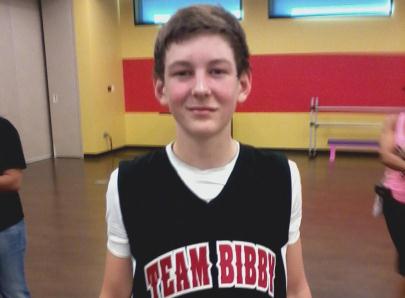 Former star pro-athletes Luis Gonzalez and Kurt Warner were in the house supporting their opposing teams.

The game started fast as 5 quick points by 6-foot-3 forward Austin Nuessie for Mountainside MS, and then 7 points in a row with a deep 3-ball by 5-foot-8 point guard Colten Kresl for Cocopah to take a 10-5 early lead.  Colten Kresl has the ability to keep his handle alive in the hardest moments and pass with either hand.

Nuessie would come back and score two more buckets - cutting it to 14 to 9. Then Kresl would hit a 3-pointer at the buzzer to end the quarter for a 17 to 9 lead.  Kresl would finish with 12 points after the first quarter.

The second quarter started and wholesale subs came in for both teams.  6-foot-2 forward Tyler Jafary checked in for Cocopah and started dominating the glass on both ends.  Jafary scored 4 points and then a 3-ball by 5-foot-6 guard Daniel Bonner on Cocapah to extend the lead to 24 to 12.

The second half would start with both teams putting out their “best 5” players. Right out of the gate, 5-foot-6 guard Parker Farley would hit 3-pointer in the corner, while 6-foot-1 forward Kade Warner and 6-foot forward Brett Teller hit shots back-to-back to cut it to a 19 to 28 game.

Four quick points by Tyler Jafary would make it a 32 to 19 lead.  Another deep 3 by Parker Farley would cut it to a 32 to 22 Cocopah lead.  Then 6-foot forward Trey Chekett scored a lay-up from a beautiful pass by Daniel Bonner to take a 36 to 22 lead after 3 periods.

Fourth quarter started and more of the same, as Kresl would hit a deep 3-ball and Tyler Jafary would score inside.  The rest of the team coasted from there as Cocopah MS would win easily - 55 to 30.

Colten Kresl finished with a game-high 19 points.  Tyler Jafary contributed 14 points, 10 rebounds and 3 blocks for Cocopah MS.  The winner of this game may have been less important than where these two kids actually will head to next year for high school basketball.  Both players have a couple schools in mind, but both may head to Chaparral HS.  Coach Daniel Peterson of Chaparral was actually there at the game supporting the local players, and hoping that one day he and his staff can coach these 2 young studs.

Quick Hitters:  Some other solid players that are going to Desert Mountain HS are 6-foot-1 forward Kade Warner (son of NFL future Hall of Famer Kurt Warner) and 5-foot-6 guard Parker Farley.  5-foot-4 point guard Scotty Shimkat will decide between Desert Mountain and Chaparral.  He was the quickest player on the court.