Michael Rogers One To Keep An Eye On 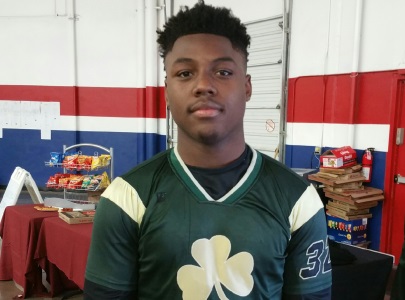 While a greater majority of Arizona’s top prospects in the 2017 class have been identified, the 2018 class is still relatively unknown to many.  One player that will be a household name soon in that class is 2018's 6-foot-1, 185-pound PG Michael Rogers of Cesar Chavez High School in Phoenix, Arizona. (I-10 Celtics 16U aau/club)

Rogers quietly put together a great sophomore campaign for the Champions of Cesar Chavez, as he averaged a solid 11 points, 3.3 assists, 4.3 rebounds and 2.2 steals per game.  He also showed no signs of slowing down, as he has competed at a very high level on the aau/club circuit for club coach Paul Suber and the I-10 Celtics U16 team - a team loaded with top 2018 and 2019 prospects from Arizona and California.

Rogers is a very well built guard who has a similar frame to that of current Celtics (NBA) guard Marcus Smart, and he knows how to use that frame to his advantage to muscle his way to the basket, as well as bully defenders when he is at the rim, where he does convert on some high level finishes.  While he is not overly quick, Michael does have a very steady handle of the basketball, but is also able to put some flash/shift on his handle, if he needs to use it to get by a defender.  Due to him not being a lighting quick guard at this point in time. He is a solid shooter from the 3-point line and in and can consistently knock down shots in catch-and-shoot situations, but does look more comfortable at this point of pull-up jumpers from the mid-range and sometimes, the 3-point line.

Rogers does have good vision from the PG position, as he reads pick and roll scenarios very well with his big men, and he is also able to look up quickly in transition and find teammates who are in a better chance to score than he is at the time. He is also relatively athletic for his height and size, as he can get up over the rim when he is in fastbreak situations.

From a defensive standpoint, Rogers is a very physically strong defender and does not give up ground very often when he is locking in on an offensive player.  He has active hands that he uses to get steals and reads the offensive players’ mind well, and can usually see the next move they are going to make.

Rogers is one of the best prospects in Arizona’s 2018 class, and look for him to gain a lot more interest from schools as the summer evaluation period is quickly approaching.