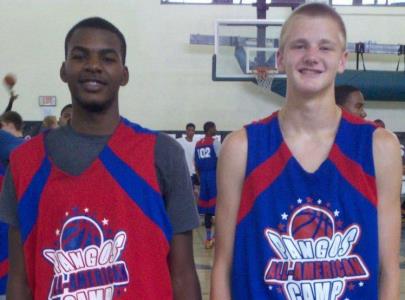 The 11th Annual Pangos All-American Camp took place this past weekend at Cabrillo High School in Los Angeles, CA and Sunnyslope’s 6-foot-10 junior post Michael Humphrey would have a coming-out-party in this year’s event, as he would gain serious national attention for his play in the camp.

Humphrey would block shots, score the basketball in the paint and from the perimeter, run the floor, rebound hard and finish strong around the rim in the event.  As a result, Humphrey would receive the vote as the camp’s Sleeper of the Event, and also as the player from the camp that should have received a Top 30 All-Star Game selection – after his performance in the Top 60 All-Star game.

As a result of his play throughout the three-day event, Humphrey would receive write-ups on top-rated national recruiting sites, Scouthoops.com and Rivalshoops.com.  Humphrey would be regarded among the top overall prospects in this weekend's event, while also being among the top emerging prospects from the all-star camp.

As a result of his performance, Humphrey would receive his first of many scholarship offers on Monday afternoon from Northern Arizona University, while other schools such as UCLA, Stanford, Vanderbilt, Arizona State and Gonzaga would each call on him throughout the day.

Humphrey missed the spring evaluation period as a result of an injury to his thumb, but he has returned in super fine fashion – recently earning an invitation to the prestigious annual Reebok Breakout Camp in Philly during the NCAA Open Period.

Humphrey was also selected as our 2013 Arizona Preps Most Improved Player of the Year.  Humphrey developed into one of the state’s most gifted post prospects last season.

Humphrey has now developed into a long, athletic and very skilled low post talent that is capable of scoring from almost anywhere on the floor.  Humphrey has grown physically a full 3 inches over the past year of high school – an intriguing attribute which shows that he is still growing a great deal.  His fluidity as a player is most intriguing as he is able to make plays from the post or from the wing position, and out to three-point distance.  Humphrey possesses a sweet shooting stroke with a sift touch and also has nice footwork inside the painted area, where he also has a nice jump hook and gets off the floor quite easily.  Humphrey dunks the basketball with ease and is able to finish strong over defenders in the paint, an aspect of his game that will only continue to strengthen for him as he adds more size and strength to his thin frame.

As a member of the state’s very loaded 2014 junior class, Humphrey is one prospect that has flown well below the recruiting radar until now.   Look for Humphrey to continue to develop a great deal over the next year.