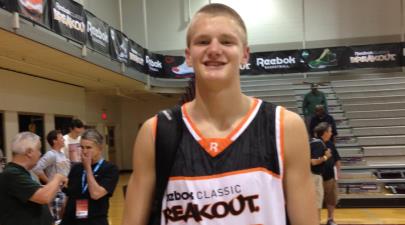 The recruiting process for Sunnyslope High School’s talented 6-foot-10 senior post Michael Humphrey has been a very secretive one as the senior prospect has kept his recruiting decisions very close to his vest.  While Humphrey received the recruiting assistance of several key contributors during the recruiting process, which helped significantly in his promotion to college programs across the country, he has decided to rely only on his own intuition and family to reach a college decision.

As a result, Humphrey has also eliminated Vanderbilt and Notre Dame from his list and will now make his final pick from two schools - Stanford and Arizona.

Unfortunately from former valley resident David Grace, an assistant coach at UCLA, Grace was unable to get Humphrey to follow through on his official recruiting visit to the program.  Grace has worked extremely hard to reel in Arizona's top prospects, previously to Oregon State and now to UCLA.  While Humphrey ultimately was not interested, Grace will hope to land another top Arizona prospect in the future.

Humphrey is currently playing football for his high school program, where he is the team’s starting quarterback.  Each of his final five college programs have each attended Humphrey's football games in an attempt to land the prospect.

Since leaving the annual Reebok Breakout Camp in Philly, Humphrey saw his college recruitment soar with a large number of college programs extending scholarship offers to the talented post prospect.  Humphrey earned more than 30 different division-I offers from college programs in the month of July.

Humphrey missed the spring evaluation period as a result of an injury to his thumb, but he returned in super fine fashion for his first event of the 2013 off-season  –  the Pangos All-American Camp held at Cabrillo High School in Los Angeles, CA.  In the event, Humphrey would have a coming-out-party, as he would gain serious national attention for his play in the camp.   As a result, Humphrey would receive the vote as the camp’s Sleeper of the Event.

In both the Reebok and Pangos camps, Humphrey would block shots, score the basketball in the paint and from the perimeter, run the floor, rebound hard and finish strong around the rim – showcasing his versatility and productive ability to get a lot done.

Humphrey was previously selected as our 2013 Arizona Preps Most Improved Player of the Year.  Humphrey developed into one of the state’s most gifted post prospects last season.  He was also recently regarded by numerous scouting services as the hottest prospect on the West Coast for the 2014 class.

Arizona Hoop Review Scouting Report:  Humphrey has developed into a long, athletic and very skilled low post talent that is capable of scoring from almost anywhere on the floor.  Humphrey has grown physically a full 3 inches over the past year of high school – an intriguing attribute which shows that he is still growing a great deal.  His fluidity as a player is most intriguing as he is able to make plays from the post or from the wing position, and out to three-point distance.  Humphrey possesses a sweet shooting stroke with a soft touch and also has nice footwork inside the painted area, where he also has a nice jump hook and gets off the floor quite easily.  Humphrey dunks the basketball with ease and is able to finish strong over defenders in the paint, an aspect of his game that will only continue to strengthen for him as he adds more size and strength to his thin frame.  Humphrey is also an excellent shot blocker with excellent length and very good timing.  He keeps balls in play and is capable of playing much bigger than his size suggests.  He also runs the floor like a guard and is a very good finisher in transition.  As a member of the state’s very loaded 2014 junior class, Humphrey is one prospect that has flown well below the recruiting radar until now.   Look for Humphrey to continue to develop a great deal over the next several years as he matures.  Humphrey is such a great kid with an infectious smile and a humble attitude that you want him to do well.  In an age where so many kids have a ridiculous sense of entitlement, Humphrey is the exception.  His sheer improvement as a player has come from his hard work and dedication to the game of basketball.  He does not cheat the sport with a lack of intensity and selfishness, but rather plays hard and seems to always be enjoying his craft.