Michael Foster On Another Level 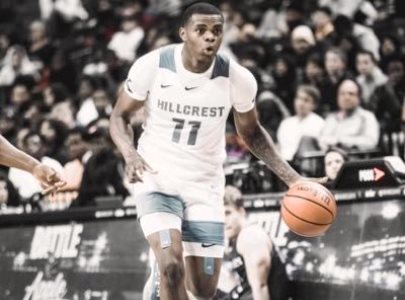 When Hillcrest Prep landed the services of nationally top-rated 2021 prospect, 6-foot-9, 220-pound junior forward Michael Foster during the off-season, it was widely known nationally amongst the basketball community what they had received. Rated by every top scouting service in America among the elite overall prospects in the country, Foster immediately took the Hillcrest Prep program to another level.

Hillcrest Prep has been consistently known for producing elite-level basketball talent in America. After producing such top-rated talents as DeAndre Ayton (Phoenix Suns, #1 overall NBA Draft pick), Marvin Bagley (Sacramento Kings, #2 overall NBA Draft pick) and also 2020 prospect Kyree Walker, whose future has yet to be determined, elite prospects are nothing new for the Hillcrest Prep program. So when the Hillcrest program landed Michael Foster last summer, while it was consistent with what they had done in the past, it was still a major surprise, as landing such elite pro prospects are so rare in the sport for prep programs across the country, but obviously not for Hillcrest.

Foster, currently rated as the #7 overall prospect in America's 2021 Class by ESPN, immediately became a hot ticket item for college programs in the West. A native of Milwaukee, Wisconsin, Foster already has a very large number of college programs in hot pursuit of him and a long list of offers, with many more on the horizon. While at Hillcrest, Foster has garnered many more scholarship offers for himself, while leading his Hillcrest program to a tremendous run, as of late.

After a very rocky start to the season by the Hillcrest program, Foster has completely turned up his overall play and has helped Hillcrest become a dominant program in the country - winning their last two consecutive major tournaments that they have participated in. After a subpar performance by Hillcrest in the Hoop Hall West event in December, Foster immediately turned up his play in New York's exciting Battle in the Apple event in Brooklyn, which resulted in a very narrow defeat by Brewster Academy (78-76). In the loss, Hillcrest led the entire contest and looked very impressive, but failed to win. In the loss, Foster was absolutely dominant on both ends of the floor - proving to national scouts his value on the court and his serious promise for the future.

Hillcrest then added another one of the nation's elite overall talents in 7-foot, 235-pound senior forward Makur Maker, after he decided to transfer to the program immediately - leaving his program, CIBA at Pacific Academy (CA), in the middle of the Tarkanian Classic in Las Vegas (NV) - joining Hillcrest in South Carolina before the start to the Chick-Fil-A Classic in South Carolina. Maker was immediately inserted into the Hillcrest Prep lineup - giving Hillcrest the most dominant lineup of talent in America.

Without any true time to practice or prepare, the newly designed Hillcrest Prep team would win the Chick-Fil-A Classic in front of loads of spectators, scouts and media. Foster would be selected as the Tournament Most Valuable Player for his continued strong play in the event.

Immediately following that event, Foster would then lead Hillcrest to another big tournament win, as the team would win the John Wall Holiday Invitational in Raleigh, North Carolina, amidst more elite team competition. Hillcrest Prep is now the hottest prep program in the country, and Foster is a major reason for the program's strong resurgence.

Foster is a tremendous talent and is a sure-fire pro prospect for the future. Actually a future NBA Lottery pick. Foster is a big and skilled power forward prospect that is able to score inside and out, and absolutely overpowers opposing defenders with his brute physical size, strength and athleticism. He is as good a prospect as there is in America, and whichever school lands this young man, will get an immediate impact performer and a program changer.

I will continue to follow the recruiting and progress of Foster closely, and bring you any updates as they continue to develop.

Arizona Hoop Review Scouting Report: Foster is a tremendous talent and is a sure-fire elite pro prospect for the future. Foster is a big and skilled power forward prospect that is able to score inside and out, and absolutely overpowers opposing defenders with his brute physical size, strength and athleticism. When he makes up his mind to do so and play inside, he is dominant and extremely difficult to keep off the glass, as he is an excellent rebounder on both ends of the floor, and is also an excellent finisher inside the paint and around the basket. He is a very good shooter of the basketball with good range on his shot, and an ability to put the basketball on the deck and make plays for himself at the basket, around and over defenders. He has a good mid-range game as well, which suits him nicely as a bigger forward prospect. He runs the floor very hard and is excellent in the open floor, where he thrives. He is a strong finisher in the open floor and also is an excellent slasher as well. Foster plays with a serious motor, which is a valuable asset for him and will suit him nicely over time. With continued hard work, Foster should develop into an NBA Lottery pick over time, and he is just a mere junior prospect.