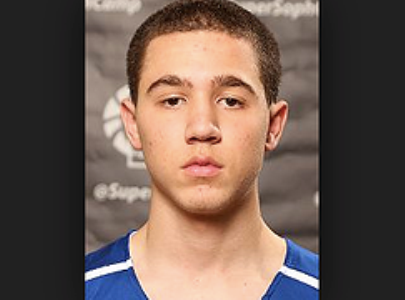 Shadow Mountain High School's talented and gifted 6-foot-1 junior point guard prospect Michael Bibby Jr. has seen his college recruitment take a hit, as he has been out of action for close to a year.  After suffereing an injury (knee) last spring during the club season, and then suffering another injury (ankle) early during the high school season, the star guard prospect has had to sit and watch a lot of basketball over the year with hopes of returning to the basketball court soon.

This season, Bibby had hoped to again lead his high school program to another Division-II state title, but instead had to watch the Matadors fall short in the state playoffs - knowing that he could have done a lot to help their cause.  Now the club season has began and Bibby has already had to watch his talented club program win last weekend's Main Event - again from the sidelines.

Last season as a sophomore, Bibby was terrific while leading his program to a state championship.  He would also be selected as a member of the All-Arizona Team by the Arizona Republic newspaper.  As a result of Bibby's exploits, he would earn scholarship offers from numerous college programs, including USC and Memphis.  He will hope to regain the form that landed such high-major division-I offers.

Arizona Hoop Review Scouting Report:  While Bibby has developed a great deal over the past two years that I have seen him play, he still has a lot of room to develop and improve as a player.  Much of this development though will come naturally as he gains physical maturity and also physical strength.  What he does possess right now is an excellent shooting stroke with unlimited range, a very nice overall feel for the game and a slick handle of the basketball.  He also possesses superior confidence in himself and his ability to make plays for himself or his teammates - confidence gained through playing hundreds of basketball games on the AAU/club circuit with his father and his talented teammates.  Bibby will need to improve his shot selection over time though, as he takes shots still quickly in the offense and, often times, with defenders draped all over him.  He still does not possess the physical strength and quickness to blow by defenders or create space for himself against better defenders, but he will over time as he continues to mature.   Bibby has the bloodlines, the support and the confidence as a player to become one of the top guard prospects to play in this state.  If he can recover from his injuries, look for this young man's recruitment to take shape this club season.

Notes:  No Arizona product that has gone on to the NBA and has done more for the state of Arizona or given back to the state as much as Bibby's father, legendary Arizona basketball product Mike Bibby.  After an illustrious NBA career, college basketball career, where he led the University of Arizona to a national championship, and also one of the best high school basketball careers in the country, Mike Bibby has returned to the state of Arizona to help promote many of Arizona's top young boys and girls basketball prospects with his successful club program - Team Bibby.  While Bibby has put a lot of his resources into the program, he has especially put a lot of his time and energy into the development of his son - Shadow Mountain High School's gifted 5-foot-10 sophomore point guard Michael Bibby Jr.