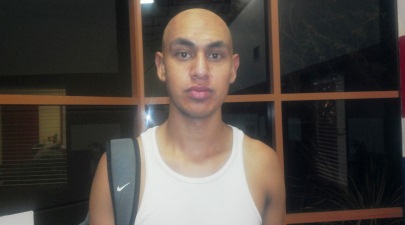 The championship game at Mesa High School in this year's Fear The Hop pre-season tournament Saturday evening featured two of the state's elite high school programs, as Mesa HS (4-0) and Gilbert HS (3-1) matched up in an exciting war.  This game seemed to be a preview of what may happen late in the season, as two very-well coached programs fought it out.

Both teams entered the game Saturday with very different perspectives.  Mesa has the best team in the state this season on paper, while many basketball enthusiasts around the state seem to think the Jackrabbits may be overrated, while Gilbert may be the state's most underrated team and is looking to prove that they can win it all this season.

Both teams would fight hard in the game's first half, with both teams matching each other step-for-step throughout the first period.

Mesa's 6-foot-2 senior guard DJ Henderson would steal the basketball and convert a lay-up in transition to put his team up by 2 points, 11-9, with :45 seconds left in the quarter.  Two free throws by Henderson, after another steal by the athletic guard and being fouled, and Mesa would take a 13-9 lead after one quarter of action.

The two teams would continue their defensive war in the second period, as Mesa would take a narrow, 22-19 lead into the half.

Mesa would get some breathing room in the third period after a three-pointer from 6-foot-6 junior forward Felipe Velazco, 27-21.  But Gilbert would climb back to within one-point after consecutive baskets by 5-foot-10 junior point guard Anthony Bryant - making the score 27-26 in Mesa's favor.

Gilbert 6-foot-3 senior guard Conner Helvig, among the state's most skilled but underrated prospects, would keep his team close late in the third period with several big baskets and assists to open teammates.  After a contested jump hook off the glass by superb 6-foot-8, 225-pound sophomore post Truman Moore, Gilbert would tie the game at 35 at the end of 3 quarters.

Mesa's sharp-shooting 6-foot junior guard Christian Harris would ignite the Mesa crowd with a long-range, contested three-point shot over the outstretched hands of a Gilbert defender - tieing the score(47-47)  and eventually sending the game into overtime.

In overtime, with Gilbert holding on to a narrow, 50-49 lead with :09 seconds left to play, Mesa's DJ Henderson would drive the basketball and throw up an errant shot attempt.  Mesa 6-foot-11 junior post Isaac Allen would rebound the basketball and miss the offensive put-back, but his teammate, Felipe Velazco, would tip in the missed shot attempt at the buzzer - giving Mesa the 51-50 tournament win.

Mesa will now move on to face McClintock HS (11/27) in their next game, while Gilbert will face Desert Ridge at home next Friday (11/30).