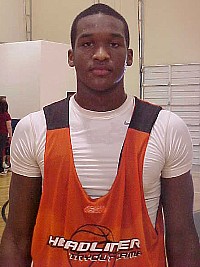 Woods played last season as a freshman at Liberty University, while seeing very little action. Woods signed with the program very late into the summer months after his senior season, and found that the program was not a good fit for his talents.

"He learned a lot from the experience," said Gene Woods, Assad's father.

Woods decided to transfer from Liberty at the completion of his freshman season, and has picked up his college career at Mesa Junior College this season - under the strong veteran leadership of head coach Sam Ballard.

Woods has played for some of the best coaches in the business in the Arizona high school and junior college ranks. Woods also played for legendary high school head coach Gary Ernst at Mesa Mountain View HS.

As a result of Woods' play, he is now beginning to generate some serious interest from numerous division-I college basketball programs. As of late, many schools are now showing interest in Woods, while three schools in particular have been in contact and are looking to extend scholarship offers to Woods.

University of Montana, Seattle University and Cal-State Bakersfield have each been in to visit Woods at Mesa JC. All three schools are now in hot pursuit of the talented wing prospect.

Woods advised me that he is in no rush to make a decision this time around, and that he is looking forward to taking some visits to ensure he makes the right decision for himself.

"Next time around, Asaad will be ready," said Woods' father - Gene Woods.

Woods will look to make a decision this spring - after the completion to his junior college season.

Arizona Preps Scouting Report: Woods is a rare find in the state of Arizona. Not just because of his variety of skill sets on the basketball court, but also because of his nice size and ability to play multiple positions on the floor. Woods has very good physical size and strength, already possessing a division-I ready body. Woods has a very good overall feel for the game, as he is capable of handling the basketball in the half-court set or in the open floor, and is also capable of scoring around the basket or away from the basket. A left hander, Woods shoots the basketball best from mid-range but is also capable of stepping out to three-point distance, although he needs more work in this area of his game to reach his full potential as a player. Shot selection can be questionable at times. Where Woods fourishes though, is in his ability to distribute the basketball to open teammates while drawing defenses to himself off the dribble. He is also a very unselfish player, which should fair very nicely at the collegiate level. Woods is also a very good rebounder, especially on the offensive end of the floor where he utilizes his strong body to gain good inside position. He is also an excellent on-the-ball defender and is capable of becoming a lock-down defender in college. A very good looking sleeper prospect.