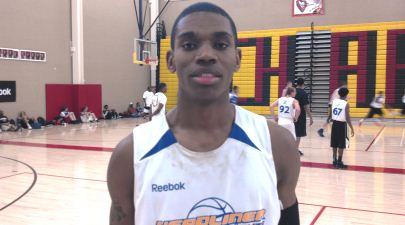 Mesa Junior College men's basketball team is coming off a strong 2013-2014 junior college basketball season - winning this year's ACCAC Conference Title.  While the Thunderbirds were dominant at times during last season, they will lose a lot to graduation next season.  As a result, Mesa JC has been in the recruiting mode for some time - looking to land some very good prospects to fill the void.

Recently, the Thunderbirds signed two top-rated prospects that were junior college transfers.  Both prospects will look to play significant roles next season for head coach Sam Ballard and his hard-working staff.

Mesa has signed 6-foot-7 sophomore forward Jonathan Wilson and 6-foot-4 sophomore guard Derrick Bowers to national letters of intent for next season.  Both prospects will add serious athleticism to the Jackrabbits' lineup.

Willson is a transfer from Williston State Junior College in North Dakota where he played some good minutes as a freshman.  Wilson also played his high school basketball at Independence HS in Glendale, Arizona and was a 2013 graduate.  Wilson is a 3/4 combo-forward prospect that is still developing as a 3, and is much more of a 4-man, although he has yet to embrace the position.

Bowers is a transfer from top-rated Western Nebraska Junior College where he also played some good minutes as a freshman.  Bowers also is in Arizona native - playing his high school basketball at St. Mary's HS in Phoenix, Arizona, before playing a year of post-graduate basketball for Westwind Prep Academy in Phoenix.  Bowers is an ultra-athletic guard prospect that has high-major physical strength and a nice body.  He is still developing his perimeter skills but should develop into one of the conference's top prospects next season.

Look for Mesa to be back at the top of the ACCAC Conference standings next season, as these two juco transfers combine with many other talented prospects for the MCC program next season.