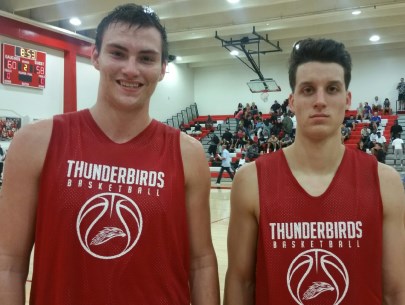 It was a big contest for both Mesa and Pima Junior College on Saturday evening, as both teams are in the playoff hunt in the ACCAC.  These two teams would not disappoint as they would fight hard until the end, before Mesa JC would pull out the exciting home victory in overtime, 94-93, despite 27 points and 11 rebounds from Pima 6-foot-8 sophomore forward Deion James.

Both teams competed hard for the entire game but in the first half, the teams looked to gain an edge on one another consistently.  Mesa JC hard-working and gifted 7-foot freshman post James Hampshire was inserted into the Mesa lineup, and immediately the high-energy post player made his presence felt in the contest.  Hampshire would tie the score at 25 all, after a nice two-handed dunk in the paint.  The dunk would ignite the Mesa team, as they would then go on a run.  The run would allow Mesa to keep pace with the high-scoring Pima offense.

The second half would look a lot like the first half, as both teams would stay very close together on the scoreboard, with each team looking to gain the game's momentum.  Pima would trail by as many as 7 points in the second half though, as Mesa would take a 79-72 lead after a Mesa three-pointer.  Pima would fight back and close the game's regulation strong.  After a nice three-point play by Deion James, the Mesa deficit would get cut to 1 point, 81-80.

With 1.4 seconds left to play in the contest, Deion James would then tie the game at 84 all, after an offensive rebound and put-back - forcing the game into an overtime period.

In the overtime period, another James post move would put Pima ahead late, 92-90, with :35 seconds left to play.

Then a 3-pointer from the corner from Mesa's Brent Kimbrel with :35 seconds remainning would give Mesa a 93-92 advantage.  Then just before the buzzer sounded to end the shot clock, Mesa's Michael Vos-Otin would finish a layup on an inbounds play.

Pima would be led in the contest by James' peformance, and also (3) different players with 17 points - 17 points and 7 assists from Zach Evans, 17 points from sophomore guard/forward Emilio Acedo and 17 points from Isaiah Murphy.

Recruiting Notes:  Mesa JC 7-foot freshman post James Hampshire is a big-time talent for the future.  Hampshire had a breakout performance on Saturday evening with 12 points and 9 rebounds in his team's win.  Hampshire played strong minutes for head coach Sam Ballard and showed excellent promise on the basketball court.

In my 20+ years of scouting players in the state of Arizona, I have not seen another post player play with as much energy on both ends of the floor.  Hamphsire is a big-time post talent for the future, as a result of his size, length and willingness to run the floor.  He moves at all times on the floor and never stops moving - even at the free-throw line when another player is shooting.  This young man has really progressed this junior college seaon, and I look for him to only continue to blossom over time.  A definite mid-major plus prospect next year.