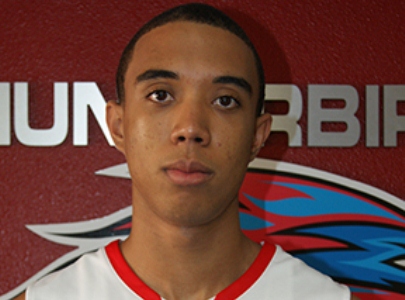 Indian Hills Junior College (IA) has been regarded as one of the nation's premier junior college basketball programs for as long as I have been covering men's basketball and even longer - producing many professional players and loads of college basketball talent across the country.  Historically, Arizona's own Mesa Junior College has boasted the same results.  So when the two storied programs came together on late Saturday evening, it made for a very interesting contest.

Indian Hills (14-2) came into Saturday night's contest as the nation's #11 ranked team in the country (NJCAA poll), and sporting one of the most talented lineups of college prospects I have ever seen on paper.  A very talented and athletic roster filled with excellent size, many division-I prospects and led by one of the top junior college coaching staffs in the country.  After suffering a disappointing loss at the hands of Central Arizona JC this week (Tuesday), Indian Hills had just come off a serious blowout victory over South Mountain JC on the Jaguar's home floor, where the Warriors scored on 22-straight possessions at one point in the game - an amazing thing to see with my own eyes.

Mesa JC (12-3) was coming off a big blowout home victory over the nation's #1 ranked junior college team, South Plains JC, on Wednesday evening (67-46).  Led by the leadership of Arizona coaching guru Sam Ballard, Mesa was well-prepared for the match-up with Indian Hills.

Indian Hills would come out fired up in the contest and jump out to a quick 10-0 lead over Mesa.  After a quick Mesa timeout, Indian Hills would continue their rapid pace in the game and push their lead to 23-8 with just over 9 minutes left to play in the first half.

Mesa would finally get settled and look to their 6-foot-8 sophomore post Christian Griggs-Williams inside.  Griggs would convert a strong layup in transition to make the score 23-10 with 8:50 left to play in the first half.

A technical foul would be called on an Indian Hills' player after a brief altercation between players on a loose ball that caused Mesa's 6-foot-2 freshman guard Tre Ogles to jump into the Indian Hills' bench.  Ogles had accidentally ran over Indian Hills' head coach Barret Peery while diving for a loose ball, causing several Indian Hill's players to defend their coach.  As a result, tempers would flare - making for an even more exciting contest for the remainder of the game.

Another transition layup by Christian Griggs-Williams with :54 seconds left to play in the first half would keep Mesa in the game, 42-28, as they were looking to prevent a first-half blowout.

Indian Hills would go into the half with a nice 44-30 lead over host Mesa.  But you can't keep a Sam Ballard coached team down without a serious fight, and Mesa would look to get things going in the game's second half after some major game plan adjustments.

Mesa would come out in the second half in a zone defense - looking to slow down the offensive arsenal of the Warriors.  With the Thunderbirds now adjusted to the flow of the game and the athleticism of Indian Hills, Mesa would look to make a run of their own.  After a three-pointer by 6-foot-4 sophomore guard Khalfuni Marks, Mesa would make the score 47-35 with 17:52 left to play in the contest.  After another three-pointer from 6-foot sophomore guard Angel Ung, and then a contested layup inside the paint from 6-foot-8 sophomore forward Tylor Wimbish, Mesa would make it a 10-point game, 52-42, with 14:15 left in the first half.

Indian Hills' terrific 6-foot-8 sophomore forward Jameel McKay (Marquette signee) would convert a strong one-handed dunk inside the paint to stop Mesa's run, and then 6-foot-4 freshman point guard Gary Williams, a graduate of Arizona's Westwind Prep, would hit a big three-pointer to give Indian Hills another big 57-42 lead with 12:25 left in regulation.

Mesa would again fight right back after a three-pointer from "Mr. Consistency" - Tylor Wimbish.  Mesa would then pick up their team's intensity and go on a 10-2 run, bringing down the Indian Hill's lead to 7 points with under 10 minutes left to play in the contest.  Wimbish would then score again on an inbounds play inside, and then Khalfuni Marks would convert a basket after being fouled on a drive to the basket to put Mesa within reach, 62-56, with 7:23 left in the game.  But Marks would miss the free-throw that would have pulled Mesa to within 5 points of the lead.

As a result, Indian Hills head coach Barret Peery and his coaching staff, which includes former BYU assistant coach John Wardenburg, would urge their team on in the final 5 minutes of the game. It would be enough to get the Warriors going again.  A contested mid-range jumper from former McDonald's All-American 6-foot-6 sophomore point guard Jelan Kendrick (UNLV signee), a monster two-handed dunk from superb 6-foot-9 sophomore forward Richard Amardi (Iowa State signee) and a three-pointer from 6-foot-6 sophomore guard/forward Frank Williams would close out the big victory for Indian Hills, 75-63.

Indian Hills would place four different players in double-figures for the game.  Jameel McKay would finish with a game-high 20 points and 16 rebounds, Frank Williams would score 17 points, 6-foot-5 sophomore Dustin Hogue would contribute 12 points and 6 rebounds, while Jelan Kendrick would chip in with 10 points and 7 assists in the win.

Mesa would be led by Tylor Wimbish with a team-high 17 points, while 6-foot-7 sophomore forward Tyler Fink would finish with 14 points in the loss.  While regulated to the bench for the majority of the game in foul trouble, Mesa's Christian Griggs-Williams would finish the game with 10 points and 2 rebounds.

Mesa JC will now move on to face another ACCAC opponent on Wednesday (1/9), when they travel to face Pima CC.