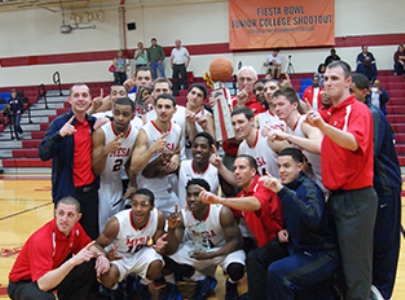 Mesa Junior College (26-4, 20-2) put it all together when it counted on Saturday evening, winning this year's ACCAC Division-I Championship with a huge 108-63 victory over Arizona Western JC.  Mesa and Arizona Western both stood at the top of the conference standings all season long, but on Saturday evening both teams met up for the conference title - a fitting end to another competitive season in the ACCAC.

Mesa caught fire in the match-up as they flat out blew a very talented Arizona Western team off the floor - jumping out to an early lead in the game and now looking back.  Mesa built a huge 55-34 lead in the first half, and then posted 53 points in the second half.  Mesa's defense in the game was terrific as they held Arizona Western to 33% from the field and 26% from three-point distance.  Mesa was on fire, shooting 52% from the field and 52% from three-point distance in the game.

Mesa will now move on to the regional playoffs for an opportunity to advance to the national tournament in Hutchinson, Kansas.