Mesa Holds Off Sunnyslope For The D-I State Title 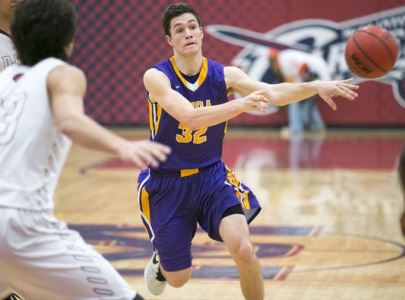 Mesa High School (27-4) started off the 2015-2016 high school basketball season with a huge win over 4-time defending Division-I state champion Corona Del Sol on the Jackrabbit's home floor - handing the Aztecs their first loss to an Arizona opponent in years.  So it was only fitting that #2 seed Mesa would be the one to win it all Monday evening at Gila River Arena in front of a large crowd of Mesa faithful.  Mesa would come from behind to win this year's exciting and prestigious division-I state championship, with a nice 51-48 victory over a tough and gritty Sunnyslope team.

Sunnyslope (25-5) was super poised for the game, and came out with a strong belief that this year's championship trophy belonged to them.  The Vikings came out behind the strong play and sharp shooting of 6-foot-3 senior guard Dane Maggi and would jump out to a big lead in the first period.  After a three-pointer by Maggi with 2:45 left to play in the first period, Sunnyslope would jump out to a big 15-5 lead.  Maggi would then make another three-pointer at the buzzer, as the first quarter came to an end - giving the Vikings an 18-9 advantage going tin to the second period.

But Mesa is one of the best coached teams in the state every year, led by veteran head coach Shane Burcar and his experienced staff.  After another three-pointer by Maggi would push Sunnyslope to a big 25 to 13 lead, a 12-point advantage, Mesa would make the adjustments needed to slow down the Vikings and get back into the game quickly.

Mesa 6-foot-4 senior guard/forward Drew Hatch (pictured) became one of the state's top prospects in Arizona's 2016 class this season, and, on Monday evening, he would prove that he is one of the state's very best unsigned prospects in the class.  Hatch would score 14 first-half points to get Mesa back into the game and keep them in the hunt for the state title.  After a long three-pointer by Hatch as the second quarter buzzer sounded, Mesa would go into halftime with a narrow, 4-point deficit to Sunnyslope, 27-23.

Maggi would finish with 15 first half points for Sunnyslope.

In the fourth period, Drew Hatch would keep his team ahead after a nice turn-around jump-shot in the post, 43-40.  Another mid-range jumper from Hatch with 2:15 left to play would give Mesa a nice 47-40 lead late in the game.

Sunnyslope would not lay down or back down, and the Vikings would fight back.  A three-pointer by talented and rising 6-foot-2 sophomore guard Kyle Fischer would make the game close, 47-43, with 1:43 left to play.  After a strong move in the lane by Dane Maggi, which would turn into a nice three-point play, and another mid-range floater from Fischer, Sunnyslope would come back to within two-points of Mesa, 50-48, but with 15.9 seconds on the clock, Drew's talented younger brother, 6-foot sophomore guard Mark Hatch, would make 1 of 2 free-throws to give Mesa a 51-48 lead.

Sunnyslope would call for a timeout, only to have their sharp-shooting senior guard, Dane Maggi, miss a three-pointer at the buzzer - giving Mesa the championship win, 51-48.