Mellinger an Underrated Prospect For Dobson 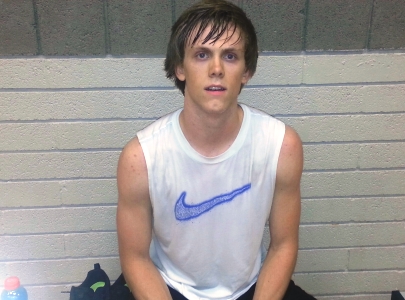 Dobson High Schoool's 6-foot-5, 180-pound senior forward Mike Mellinger is coming off a good spring and summer for himself on the club circuit, and is now looking to carry over his strong play to the high school season.  In hopes of leading his Dobson Mustangs to the state playoffs, Mellinger will look to expand his game this season to help his team, and also expand his college recruitment.

This high school season, Mellinger will look to expand his overall game.  Last season, he saw much of his time inside the post for long-time successful head coach Rick McConnell.  This season, Mellinger will look to play much more as a 3-4 - a combo-forward which will allow him to do more on the floor, and show his ability to handle the basketball as well as shoot the basketball from the perimeter.  Mellinger is able to score inside and outside, and the transition to becoming a combo-forward is something that can help the success of the Dobson team, as well as improve the overall college recruitment for Mellinger.

Currently, Mellinger is hearing from several smaller college programs for his services, including Arizona Christian.

Mellinger proved this club season that he is a strong, athletic prospect that is capable of creating mis-match problems for bigger post players inside the paint, and can shoot over smaller defenders from the wing.  He is very active on the glass and plays with a good overall motor.

Mellinger and Dobson HS are coming off a nice road win last week at Hamilton HS, after struggling in this year's Paradise Valley Inivitational.  They will face Highland HS (3-3) on the road Tuesday evening, before hosting a talented Central HS (6-0) team on Friday - two very important games for the Mustangs this week.

Mellinger will need to come up very big in both of these two games this week to keep the Mustangs in the Division-I hunt for the season.

I will be keeping a close eye on Mellinger this high school season, as he is one of the more underrated prospects in Arizona's 2015 class.