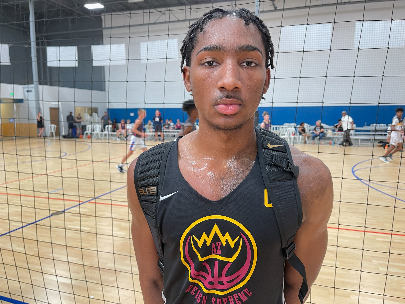 AZ Compass Prep's gifted 6-foot-5 senior guard Mekhi Mason (Rice commit) saved his best for the spring and summer, after backing up terrific 2021 talent Ty Ty Washington (University of Kentucky) all season long. As a result, Mason saw very little playing time during the high school / prep season. Instead of resting and waiting for his opportunity, Mason instead worked very hard on his body and his game and stayed ready. Mason would get his opportunity to blossom during the spring and summer - proving his extreme value as a college prospect.

Mason was one of my true favorite prospects to watch throughout the spring and summer, as he added (15) pounds of muscle to his once thin frame. The added size and strength added by Mason took his game to another level, as he looked very comfortable and confident on the club circuit, as he led his Arizona Supreme Reign team to a strong showing throughout the club season. After several strong performances for himself, Mason really showed well in Las Vegas in the Summer Championships, organized by the The Hoop Circuit. In the event, Mason played at a very high level - leading his team to a big win over a tough and well-coached Veritas Prep (CA) program in one game. Mason proved to be one of the elite overall individual talents in the event, and one of the top overall prospects I viewed throughout the spring and summer.

Rice University Head Coach Scott Pera and his staff should be commended on their recruitment of Mason, as they offered him a scholarship and took his commitment, at a time when Mason was not highly regarded. He was not playing much and was not a hot prospect among other college programs. In a time where coaches always want to know which other programs are involved, before making their declaration for a prospect, Rice and their basketball staff gave a strong commitment to Mason early in the recruiting process. Rice, a high academic program with a long-term commitment to Pera and his staff, is an excellent fit for Mason, and he and his family also knew it early in the process.

Mason is a bigger guard prospect with excellent size and athleticism. The added size to his once thin frame, did wonders for his ability to bounce off of defenders and make plays in the lane and at the basket. Mason is a deadly shooter with range on his perimeter shot, and has a strong mid-range game, which allows him to make plays off the dribble and create his own shot, or open shots for his teammates. Mason has very good explosiveness off the dribble and does not mind physical contact, which allows him to read his defenders when attacking the basket. He has a nice ability to stop and pull up for a nice jump shot. He has a strong handle of the basketball and plays at a very nice pace, very seldom seen from high school players. He plays fast when he needs to and also slows the ball down to make the best decision often. A very crafty player that is a throw-back of sorts in his approach. He has excellent play-making ability, so he can play at several different positions on the court. His ability to find others and make players around him better is very intriguing. The better players around him, the better he looks. He also sets up defenders nicely for strong drives to the basket and floaters in the lane. Very shifty off the dribble. Strong in the open floor and an excellent finisher. A strong ball handler and passer. An active rebounder that uses his length to collect balls outside of his area. A strong defender that plays passing lanes often, and is a lock-down on-the-ball defender that absolutely frustrates opposing guards.

Mason has been regarded by our Arizona Preps' staff as one of the top guard prospects in the class for some time, but he has quietly waited for his turn to take center stage. A very unselfish performer, Mason lets his basketball do the talking and is now much more vocal on the court, as a result of the superior confidence he possesses as a player. His best years are well ahead of him though, and he is now just coming into his own as a college prospect. Mason has excellent upside for the future, and an advanced understanding and feel for the game. The son of a current and long-time successful basketball coach in the state, Victor Mason, Mekhi has been around the game all of his life, and it shows, as he loves the game. I have watched this young man grow up over many years, and now he has grown into a serious basketball talent.

In a world today where top-rated basketball prospects look to play at the highest level and choose the school name and conference, rather than the school's fit for their individual talents, Mason found the right fit, but so did the college program - Rice University. He will get a great education and also have a chance to play and contribute early. Our staff wishes Mason the best in his college future, and also for his senior season at AZ Compass Prep. He is a role model for Arizona's student-athletes.