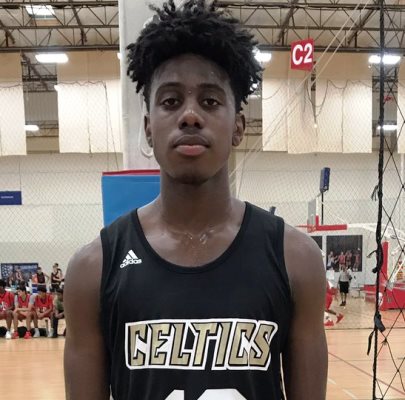 Another one is off the recruiting board, as AZ Compass Prep's 6-foot-8, 210-pound senior forward Meekness Payne has made his college decision.  After thinking over his options and taking a couple recruiting visits for himself, Payne decided to head towards the junior college ranks for an opportunity to improve his overall college recruitment.

Central Arizona Junior College made it well known early that they wanted Payne, and this week they got their man, as they signed the talented combo-forward prospect to a national letter of intent.

Payne is coming off a good season for his prep program, and also had a very strong performance during the NCAA spring evaluation period.  While playing for Alvin Gentry Elite this spring, Payne ranked among the top overall performers in several events that he participated in.

While Payne really developed as a player over the past year, while playing against some of the nation's top talent, his college recruitment was lackluster at best for a player of his abilities.  A strong stint in the junior college ranks should suit him nicely in hsi future college recruitment.
Payne is an athletic combo-forward prospect with a very high motor.  He also has some serious upside for the future with nice potential.  Payne is a versatile prospect that is a winner, and does the intangibles for his team to be successful.  He rebounds outside of his area, guards the best frontcourt player on the floor, gives up his body for his team to win and plays much bigger than his size suggests.  I love this young man's attitude on and off the floor as well, and young players can learn a lot from him.

Congratulations to Payne and his hard-working family on this accomplishment, and also his future from our staff here at Arizona Preps.

Arizona Hoop Review Scouting Report:  Payne is a versatile forward prospect that is able to play much bigger than his size suggests.  His athletic frame allows him to play as stretch-4 man, and also defend all three frontcourt positions on the floor.  He is a winner, and does the intangibles for his team to be successful.  He rebounds outside of his area, as a result of his extreme activity on the floor.  He has developed into a combo-forward prospect, and can help a team with his versatility on both ends of the floor.  He is a very good shooter with range, and is an effective three-point shooter.  Payne's best aspect of his game though is that he is an excellent defender that accepts challenges on the defensive end of the floor.  He can guard each of the frontcourt positions on the court, and does not mind defending bigger post players either.  A winner.