McGlothan Rising To The Top 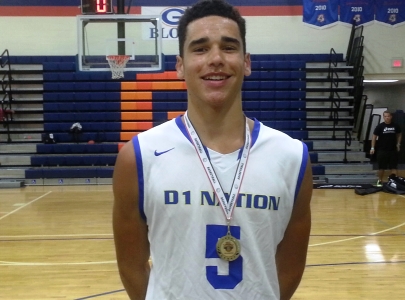 Arizona's 2017 class of prospects is loaded with talent, but with the recent transfers of Perry High School's superstar guard Markus Howard (Findlay Prep) and St. Mary's star guard Marcus Shavers (Texas), the class has taken a major hit.  As a result, other top-rated prospects in the class will quickly see a rise to the top of the class rankings.  One of these prospects is Basha High School's talented and promising 6-foot-5, 195-pound sophomore wing Gabe McGlothan.

McGlothan has quickly emerged this spring as one of the elite prospects in the class.  After leading his club program, Arizona D1 Nation 16U, to consecutive Double Pump tournament championships in the 16U Division this spring (won 3-consecutive tournament championships), McGlothan has become a very hot prospect in the group of talented 2017 peformers.

It is at the right time for McGlothan, who emerged  this past high school season for his Basha HS team in a reserve role.  While seeing a lot of playing time this season while coming off the bench, McGlothan provided excellent athleticism and an ability to slash for a talented group.  Next high school season, McGlothan will have developed into a serious recruiting target for 2017 and will be a major factor in the school's starting line-up.

The frontcourt combination next season of McGlothan, 6-foot-10 post Devin Kirby and 6-foot-9 post Klay Stall will be formidable, and among the  best frontcourts in the country.  It will definitely be the best frontcourt in the state of Arizona.

McGlothan is a sure-fire talent with loads of potential for the future.  Still a young prospect, he is a very gifted athelte with excellent size and a nice overall skill level.  He plays the game with passion and is capable of making plays most players in the state, regardless of class, cannot make.  Based on what I have seen already from this young man, he is a definite high-major division-I prospect that should receive his fair share of college recruitment.

Currently, according to his terrific club coach Glenn Mayberry, McGlothan is already receiving interest from numerous mid-major programs, and offers should begin pouring in for McGlothan.

I will be keeping a close eye on McGlothan as he continues to develop as a player over the next two years, and it should be exciting to watch as he develops into a big-time performer.

Arizona Hoop Review Scouting Report:  Get ready for this young man, as he is a big-time young prospect for the future that many do not know about.  That will change very soon.  McGlothan is a big-time young talent that will soon garner much division-I recruiting interest, and if he gets seen by the right people, this is a high-major division-I prospect.  McGlothan is an excellent looking prospect with a nice skill level, combined with superb athletic talent.  He can make plays that most players cannot, and above the rim.  He has an excellent feel for the game and it is obvious that this young man plays often and works on his craft.  Resembles a young Bryson Krueger (Arizona State), former Mountain Pointe HS graduate, as a player.  Watch out for this young man over the next two years - his future looks extremely bright.