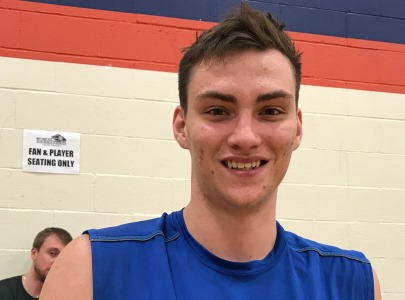 While it is getting very late in the recruiting process for college prospects, and with very few good post prospects available currently in the West, Mesa Junior College 6-foot-10, 250-pound sophomore post Ed Hardt is still considering his options for school this fall.

Hardt became available this spring after receiving his release from his national letter of intent from Seattle University.  Hardt signed with Seattle before the start to the 2016-2017 junior college season.  Projected as the top overall true low-post prospect in the conference before the season, Hardt would see limited playing time this junior college season, as the Mesa coaching staff would elect to go to a smaller lineup all season.  As a result, Hardt's numbers this season took a serious hit, which has made it difficult for him to gain exposure to college coaches this spring.

Hardt decided to re-open his college recruitment this spring after the Seattle staff was released from their duties by the school at the end to the season.

A graduate of Deer Valley High School, Hardt has improved a great deal over the past several years - as much as any player I have seen in sometime.  Under the development of Mesa JC long-time terrific head coach Sam Ballard, Hardt made dramatic improvement as a college prospect over the past two years for the Thunderbirds.

I will continue to follow Hardt's college recruitment closely this summer, and bring you any recruiting updates as they continue to develop.

Arizona Hoop Review Scouting Report:  Hardt is a wide-body post player with broad shoulders, excellent physical girth and a strong motor on both ends of the floor.  An excellent rebounder and physical post player, Hardt is a true post player - one that uses his big body to his advantage and competes hard on both ends of the floor.  He gets very good inside position and is a space-eater - an asset to any team.  He enjoys physical contact and uses his body to position himself nicely for rebounds, which he then starts the fastbreak with nice outlet passes.  He is very vocal defensively and a good team defender.  A capable shotblocker.  Runs the floor hard.  Has a good overall skill level and can step outside and shoot the basketball out to three-point distance, but he does his work primarily inside the paint - a nice attribute.  A good passer.  Has solid low-post footwork and good hands.  A good sleeper prospect.