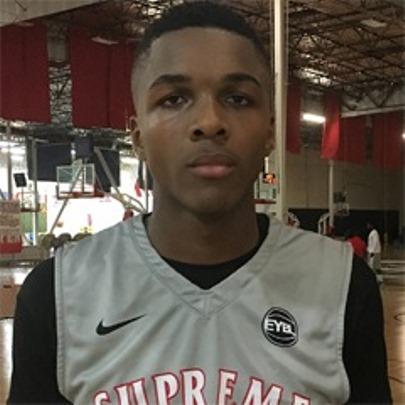 Day one of this year's McClintock Holiday Shootout kicked off with a bang, as one of the top wing prospects in the West, Chandler High School's 6-foot-6 junior Tevian Jones (pictured) scored a game-high 21 points to lead his team to a 63-41 win over a talented Mesquite team.  The day was filled with some exciting action, as each of this year's teams completed the first round tournament games.

I was on hand for all of the day's action, as the Arizona Preps' staff watched each of the first round games on the day - starting at 10AM and finishing after 10PM.  A long day filled with many top performers.

Shadow Mountain HS proved that they are the team to beat in the tournament - defeating an overmatched Campo Verde team, 82-52, in blowout fashion.  In the win, Shadow showcased three of the best guards in the West.  6-foot-3 senior guard Marcus Shaver (UC-Santa Barbara signee) put on an nice performance, which included a monster-two hand alley-oop dunk on an inbounds pass from 6-foot-2 sophomore guard Jaelen House.  Shaver showcased his division-I ready body and athleticism in the game, combined with a very nice shooting stroke and handle of the basketball.  Super Sophs, guards Jaelen House and 6-foot-1 sophomore guard Jovan Blacksher proved why they are both considered among the top 2019 guard prospects in the West - scoring at a consistent pace and making plays off the dribble for their team.

Chandler's Tevian Jones was the top performer of the day though, as he displayed his unique athleticism which allows him to soar through the air and finish dunks over defenders.  He also showed a much improved mid-range game and displayed a nice shooting stroke off the dribble.  This young man could have done as much as he wanted to in this game, as he let the game come to him and did what he wanted to.

Phoenix College assistant coach Duane Eason stated after the game, "He could have scored 50 - he did what he wanted."

In the loss, Mesquite showed that they have a formidable group of players to make a nice run late in the high school season.  While 6-foot-2 junior guard Jaden Lee and 6-foot-4 freshman wing Xavier Dusell would struggle from the field a great deal in this first round match-up, both prospects are extremely talented and will have strong performances throughout the remainder of the high school season.

Lee was playing in his first game of the season, after sitting out (9) games due to AIA transfer rules.  He looked to be pressing and playing at too fast of a pace for himself to be effective, but you can see the ability and extreme athleticism.  Lee will make a lot of noise this high school season as he settles down and gets more games under his belt.  He should play big for the remainder of this event.  Dusell is among the top frosh prospects in the state.  Still very young physically, Dusell will only continue to grow a great deal physically over time and get much stronger in his play.  Dusell has excellent versatility as a bigger guard prospect, and needs to continue to focus on his playmaking skillset to open up his entire offensive game.

Mesa High School looked terrific in their first round performance, dismantling a tough Boulder Creek team, 76-59.  Boulder Creek held tough in much of the contest, until Mesa exploded in the fourth period to open up win.  6-foot-4 senior forward DJ Henderson was strong in the win with his play, proving to be one of the state's elite available unsigned prospects.  Due to academic troubles, Henderson will have to head the junior college route this spring, so look for many junior college coaches to be in hot pursuit.  Henderson is a strong low post player that has a very good feel for the game and good footwork.  He is also able to play on the perimeter, althoug he is at his best from mid-range, where he is able to score effectively - inside and out.  He is a very good rebounder and finisher inside the painted area.

Mesa will face Chandler in the secound round in an exciting match-up.  The winner of this game will advance to the semi-finals - making for a very exciting tournament.

Boulder Creek was led by the play of 6-foot-4 sophomore forward Jacob Howie, who finished with a game-high 24 points in the loss.  Howie is a superb talent with good size and a nice overall skillset - capable of shooting from the perimeter and also posting up.  He is a very intriguing prospect that has potential to develop into a nice division-I talent.   One of the state's better sleeper prospects in the 2019 Class.

6-foot-5 junior wing Rashad Smith led his Hamilton HS ballclub to a nice 59-53 win over Marcos De Niza, despite another strong shooting performance from 6-foot-2 senior guard Mason Stark.  Smith showed his always, extreme versatility in the win - handling the basketball in many situations, shooting well from the perimeter and also creating scoring opportunities off the dribble for himself and others.  Smith is among the top rising prospects in Arizona's 2018 class, and he continues to prove why.  A nice guard prospect for the mid-major level that has upside.

Arcadia HS improved to 13-1 on the high school season with a nice 76-56 win over Gilbert HS.  6-foot senior guard Max Moses poured in a game-high 28 points in the victory - shooting the basketball with precision in the contest.  Moses is among the best pure shooters of the basketball that I have seen, and he is worthy of serious interest from smaller schools.  6-foot-3 junior guard Jaylin Fleming made his debut for most Arizona basketball enthusiasts, and finished strong in limited action - finishing with 14 points, 5 rebounds and 3 assists.  Fleming transferred from Chicago this high school season, and is just now getting accustomed to his new surroundings.  Fleming is a very good pure-point guard prospect for Arizona's 2018 class.

Arcadia will advance to face Brophy Prep in the second round.  Brophy defeated Tempe HS, 73-44 in easy fashion in the first round, behind the play of 6-foot-9 senior post Sean Dunn (Point Loma signee), and also 6-foot-3 junior forward Colin Besh.  Besh poured in a game-high 24 points in the win.

Mountain Pointe continued their strong play this high school season with a 64-51 win over Desert Mountain - advancing to the second round to face Shadow Mountain.  Host McClintock HS also defeated Dobson in overtime, 58-53, and will advance to meet Hamilton in the second round.