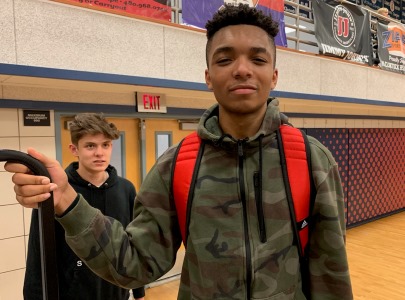 Day one of this year's McClintock Holiday Shootout took place on Wednesday on the campus of McClintock High School, with each of the teams in action on the day.  Each year, and for many years now, this annual event's tournament champion has given us a glimpse into the eventual state champion in a particular division.  Day one of this long-time annual event kicked off with no real surprises.

The biggest and maybe only surprise of the day though was featured in one of the evening games on the day, as Liberty High School (7-7) would lead Arcadia (8-6) for the entire contest, from start to finish, only to fall to Arcadia on a final second shot attempt, 68-66.

With just over :30 seconds left to play in the game, and holding on to a 7-point margin, Liberty would completely fall apart in the game.  After fouling a 3-point shooter  from Arcadia, the Titans would get life again late.  The biggest play of the game would take place soon after, as Arcadia High School's 5-foot-11 sophomore guard Jerico Fleming (pictured) would fight hard to recover an offensive rebound from the hands of a Liberty player, taking the ball from the other player's hands, and recovering the basketball for his team with :26 seconds left to play.  Fleming would rebound the basketball and kick it out to 6-foot-4 senior guard Carter Murphy (Air Force signee) for a three-pointer - narrowing the margin and giving Arcadia life.

Just seconds later and down by two points, Fleming, who is the younger brother of former Arcadia 2018 graduate Jalin Fleming, would then go to the free-throw line after being fouled.  Fleming, whose name is not even on the roster in the tournament program, and who is a very young contributor for his team, would calmly sink both free-throws to tie the contest at 66 all.  Fleming had also played excellent defense throughout the game, slowing down Liberty gifted guard prospect Josh Ursery (Hutchinson JC commit).

In the final seconds of the game, Liberty would again turn the basketball over on the inbounds play - giving Arcadia one final shot with :02 seconds left to play.  With just seconds left to play, another young performer would step up for Arcadia HS head coach Stephen Danford and his staff, as Arcadia would find a cutting 6-foot-5 sophomore Owen Shaw for a nice layup at the buzzer - giving Arcadia the amazing come-from-behind first round victory.

Notes:  The Gilbert Tigers (12-1) would advance with a win over Basha HS in the first round Wednesday.  I was very impressed with the overall performance in the game of 6-foot-7 senior post Carson Towt.  Without the services in the game of 6-foot-8 junior Griffin Lamb, Towt would absolutely dominate the paint for Gilbert against a smaller Basha HS team.  Towt is a skilled low-post prospect with an excellent motor and a live-body around the paint.  He possesses very good footwork and body control around the basket, and has a nice knack for scoring the basketball after taking contact, which he does not mind.  While he didn't show anything from the perimeter in the game, he has excellent length of body and runs the floor hard and is a strong finisher.  A very good sleeper prospect for a 4-year college program for the spring, as he has good upside and potential for the future.

Liberty HS 6-foot-7 freshman forward Foune Doucoure is a big-time future talent, as he is well beyond his years.  While he already physically looks much older as a prospect, this superb young talent will have a very bright future ahead of him.  He has an excellent body and displays strong basketball properties early in the process, as he keeps the basketball up high on rebounds, has very good footwork and a feel for the game and has very good timing as a shotblocker.  Doucourse is a versatile frontcourt talent that will only continue to develop a great deal over time in his approach to the game, but currently he has a nice ability to score around the basket and run the floor and finish.  He is also a very good passer of the basketball out of the post and posts strong around the basket.  I will be keeping a very close eye on this young man for the future, as he develops.