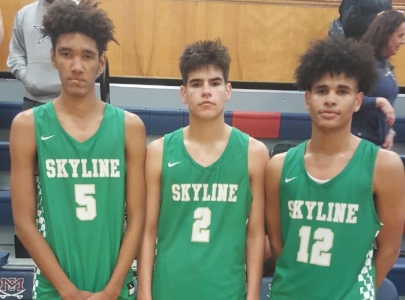 This year's McClintock Holiday Shootout completed earlier this week with a big final match-up between Skyline High School and Arcadia. Skyline would edge out Arcadia in narrow fashion, 70-67, for the tournament championship win. The tournament win was just another big accomplishment by the Skyline program this season, led by the play of their terrific senior guard prospect, 6-foot-2 senior guard Dayton Harris (Northern Arizona signee).

Skyline has had one of the toughest schedules in the state this season, possibly the toughest this season. Skyline also defeated Dream City Christian Prep in an exhibition game earlier this season as well, in very surprising fashion - their biggest win of the year, but before the start to the season.

Skyline HS hard-working Head Coach James Capriotti has done an amazing job in leading this group, and has done an amazing job in preparing his team for each game and for a terrific season. He is an intense coach that loves his team and players, and instills a high level of confidence in his student-athletes. While his team does not have a true, imposing post player, the team plays at a high-speed pace and with an intense defensive style that creates turnovers and deflections, which lead to scoring opportunities.

The team has been led all season by a trio of top-rated prospects, as Dayton Harris has led the group, but has been supported highly by the play of do-it-all 6-foot-6 senior forward Tanner Poeschl and his younger brother, sharp-shooting 6-foot-4 sophomore guard Dominic Capriotti. This dynamic trio of performers have been terrific this season.

Harris comes from excellent basketball bloodlines, as he is the son of Hamilton HS Head Coach Doug Harris, one of the better players to ever play the sport in our state. Doug Harris was a 1990 graduate of Corona Del Sol HS, and after winning state titles for the Aztecs, went on to play at Fresno State and the University of San Diego. Dayton Harris was raised by his step-father, James Capriotti, and has developed into one of the state's elite guard talents. A play-making guard talent, Harris loves to have the basketball in his hands and he enjoys making plays for his teammates - making players around him better. Harris is a very good shooter with excellent range on his shot, and a nice mid-range game, which allows him to make plays at the rim. He is very good in the open floor where he thrives, and is a very good finisher. He is an excellent finisher with very quick hands and feet, and plays passing lanes - resulting in deflections and steals for his team.

Harris is the catalyst for this year's team and has been the leader for this program since his sophomore season, and has played at the varsity level all (4) seasons for the program. Harris is having a big season in his senior year - averaging 16.8 points, 9.3 assists, 4.4 rebounds and 3.7 steals per/contest. Harris has signed with Northern Arizona and will be a great addition to the Lumberjacks' basketball program next fall.

Do-it-all 6-foot-6 senior forward Tanner Poeschl is one of the state's most unheralded talents, and has flown well-below the recruiting radar. He has a long, rangy frame but is super thin physically, like that of NBA superstar Kevin Durant. While very thin, he gets a lot done on both ends of the floor and has a very good overall skill level, which allows him to score inside and out. He shoots the basketball well with range and is very effective around the paint, where he uses his length to make plays. He is a good finisher around the paint and is good in the open floor. He is an active rebounder and shotblocker and plays all over the floor for this team, and may be the team's most valuable asset on both ends of the floor. Look for him to gain much more recruiting interest this spring, as he is a definite division-I talent that can play at the low to mid-major division-I level.

6-foot-4 sophomore guard Dominic Capriotti is the son of Head Coach James Capriotti, and the half brother of Dayton Harris. Capriotti is one of the state's best pure shooters of the basketball, as he has unlimited range on his shot and a quick release. He is able to make shots from almost anywhere on the floor, and has never seen an open shot that he doesn't like - making him very difficult to defend for opposing teams. He is also a tough kid naturally and can get under the skin of opposing players, a nice attribute for him. Capriotti has quickly developed into one of the state's top young prospects this high school season.

Skyline HS has a very well-balanced attack overall, and has also had strong performances all season from 6-foot-1 junior guard Patrick Herrera (12.6 ppg) and tough, gritty left-handed 6-foot-5 senior post Tyree Tyler (8.8 ppg). Herrera is also a tough, defensive guard and Tyler is a strong rebounder and finisher around the basket with excellent toughness as well.

Overall, this team is very well coached and prepared to continue their strong run throughout the remainder of the high school season - winners of their last (5) games on the season. They have the potential to not lose another game this high school regular season, as their schedule is very favorable for the remainder of the year. Skyline is a definite favorite to compete for this year's 6A State Title.

Congratulations to Skyline High School and their coaches and players on a terrific season thus far, especially after the recent incident that took place earlier in the season after the win over Chavez HS. This team has rebounded nicely from that incident and now has a chance to win it all this high school season.