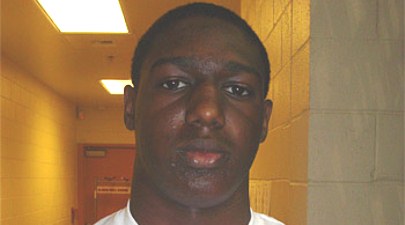 The wait is over for the "Big Fella."  After a long recruiting process for himself and his family, Basha High School's 6-foot-9, 225-pound senior post Maurice Kirby has made his final college decision - deciding to give a big verbal pledge to Virginia Tech, a member of the prestigious Atlantic Coast Conference (ACC).

The commitment came for Kirby on Thursday afternoon while on an official recruiting visit to the school.  Kirby and his mother visited the program this week and liked what they saw - enough to give a verbal pledge to the program.

Kirby had also taken recent recruiting visits to Loyola University Chicago and Brown University, before making his decision.  The offer from Virgina Tech came last week, which would change everything for Kirby.  The offer was unexpected by Kirby, who had seen his college recruitment tail off a great deal in recent months.

Once committed to a PAC-12 program in Arizona State, Kirby saw his college recruitment take an interesting twist over the past couple of years - after playing for multiple club programs and decommiting from the Sun Devils - just months after his early commitment.

Kirby committed to the Sun Devils and head coach Herb Sendek and his basketball staff as a mere freshman prospect, while under the leadership and development of former club coach Jeff De Laveaga.  But soon after a verbal commitment to the Sun Devils, the lure to play for out-of-state club programs caused Kirby to play for numerous club teams out of the state - receiving very little in return and decreased college recruitment.

Kirby will return this high school season to lead his Basha HS program after the departures of several players from last year’s team, including top-rated 2013 prospects Torren Jones and Jaron Hopkins (University of Colorado commit).  Jones moved to the state of Indiana, while Hopkins transferred to Mesa Dobson HS.

Congratulations to Maurice and his family on an amazing accomplishment for his future from our staff here at Arizona Preps.

Arizona Hoop Review Scouting Report: Kirby stands close to 6-foot-10 in height and has a nice wingspan for his size.  Kirby has good mobility as a post player and also exudes a nice work ethic.  He has a soft touch from the perimeter out to 15 feet, but needs more touches to continue to develop his perimeter skills.  He also has good low post footwork and a nice jump hook around the basket area, although he rushes his moves at times.  He is a solid shotblocker with good timing.  Kirby runs the floor well and competes hard to gain good inside position around the painted area.  He is an active rebounder and attempts to rebound the basketball outside of his area.  He is a solid passer with a willingness to find the open man on the floor.  Kirby possesses a great attitude on and off the floor and has a nice smile.  This young man should only continue to improve over time with better coaching, since he definitely has the right attitude.