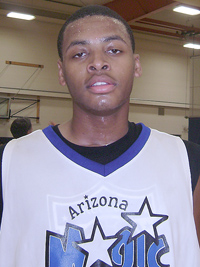 After signing a division-I scholarship in the fall of 2010 with the University of Utah and spending a freshman season under first-year head coach Larry Krystkowiak, Matthews got his release from the PAC-12 program last month.  After mulling over his options, Matthews has decided to sign a national letter of intent with the University of Texas-San Antonio and head coach Brooks Thompson.

UTSA assistant coach Jeff Renegar was instrumental in the recruitment of Matthews, after developing a close personal relationship with Matthews since his high school days.

"I was really looking for a program where I felt really comfortable with the staff," said Matthews.  "This is the best fit for me and I think I will be able to have a good career there."

Matthews received interest from numerous division-I programs over the past month, but never really considered another program throughout his recruitment.

"They made it clear to me that they wanted me as soon as I decided to transfer from Utah," said Matthews.

Matthews will join former AAU/club teammate and Arizona native Jordan Simms (Liberty HS)  on the UTSA roster next season, but will have to sit out the season due to NCAA transfer rules - becoming eligible during the 2013-2014 season.

Matthews, a 6-foot-6, 215-pound freshman at Utah, didn't see much action as a freshman as a result of suffering a broken foot during the summer of 2011 - an injury he never fully recovered from.  As a result, Matthews came into the 2011-2012 season out of shape and didn't have a good pre-season conditioning program for himself.  Matthews then re-aggravated the foot injury during the season (February) with a strained ligament and missed the last 10 games of the season.

Matthews was an original recruit of former Utah head coach Jim Boylen - deciding to stay with the program after Boylen was let go before Matthews would even put on a Utah uniform.

Matthews averaged 22 points and 11 rebounds as a senior at St. Mary's HS, and also averaged 18 points and 8 rebounds for a talented post-graduate team at Westwind Prep - a team that was rated as high as the #8 prep school team in the country.

UTSA, currently a member of the Southland Conference, will be joining a super conference next season as a member of a merger between Conference USA and the Mountain West Conference.

Arizona Hoop Review Scouting Report:  As a player, Matthews is a bit of a throw-back performer.  A fundamentally sound forward that likes to score either from long-distance or from mid-range off the dribble.  He utilizes pump fakes and jab steps to gain an offensive edge on his defender, while using either hand around the basket to score.  He is a very strong finisher around the basket, utlizing a variety of moves and is able to dunk the basketball with ease as a result of his very long wingspan.  He has a long, rangy body.  A very good defender for his size, he has good lateral foot quickness to stay in front of his offensive opponent - when he is focused.  His long wingspan also allows him to alter or block shots, making it tough for opposition to score on him.  He is also a very good offensive rebounder that is always around the basketball.  Has very good upside.  While he has very good work ethic off the court, his focus on the court remains the key to his development as a player.