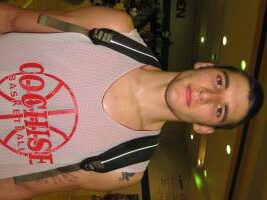 After speaking with Cochise Junior College head coach Jerry Carrillo on Friday evening, he informed me that his talented post prospect, 6-foot-9 sophomore Matt Korcheck will also sign with the Wildcats.

Korcheck took a visit to the University of Arizona this weekend, and spent some time with the Wildcats coaching staff and will now make his decision to play for the basketball power - adding to an already superb class for the program.

Carrillo advised me that Korcheck will red-shirt during the 2012-2013 basketball season.

"That was always the case," said Carrillo.  "We made that clear in the beginning that wherever he went he would red-shirt his first season."

Korcheck will add toughness and rebounding, while also providing interior depth for the Wildcats.

Korcheck saw his large share of college recruitment after a strong freshman season last year propelled him as the ACCAC conference's and one of the nation's top 2012 junior college post prospects.  Korcheck and Cochise Junior College head coach Jerry Carrillo heard from just about every division-I program in the country over the past year, which each school looking to land the tough, hard-nosed juco post prospect.

As a result, Korcheck played through the recruitment this season and was selected as a 2nd Team All-Conference selction, while Jerry Carrillo earned another ACCAC Coach of the Year honor, after leading Cochise to the regular season conference title.

Korcheck landed at Cochise JC in the spring of 2010, after failing to qualify academically by the NCAA's standards.  Korcheck originally signed with UTEP after a high school career at Sabino High School in Tucson.

Korcheck is a strong and athletic post presence with a strong ability to rebound and defend the low post.  He runs very well and competes at a high level, while playing with a very good attitude on the floor.  While he still needs work offensively, his defensive presence is a nice attribute for any team.  His big, athletic frame is very attractive to the eye.

Korcheck also looks to be on pace to graduate from Cochise JC this summer.

Arizona Hoop Review Scouting Report:    Korcheck is a tough, defensive-minded low-post talent with an excellent build and strong physical frame.  His body is very attractive, allowing him to definitely look the part.  He runs the floor like a guard and runs hard.  Competes at a high level on both ends of the floor, so he is capable of picking up fouls as a result, but he is an asset on the defensive end of the floor.  Excellent rebounder with a very physical nature.  Solid shotblocker, although that is not his strong suit.  A good low post scorer that enjoys physical contact and gets to the free-throw line quite often.  Good finisher.  Has good hands.  Can catch and face the basket out to 15 feet, but is most effective on the low block.  OK shooter from mid-range, but needs to become more consistent away from the basket.  Has solid low-post footwork, but still needs development on his low post moves to reach his full potential as a player.  His toughness and ability to compete are his most attractive attributes.  As he develops offensively, he will see his game progress nicely.  Has some upside.