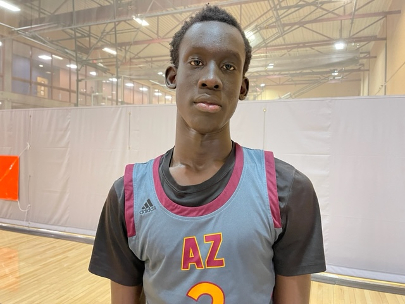 With the primary focus on the 2022 Class currently, many college coaches are already focusing on the 2023 Class for next spring and summer. One prospect that many do not know about, but is one of the elite talents in the class is Dream City Christian Prep's 6-foot-7 junior wing Mathiang Maker. While college programs still do not know much about Maker as a college prospect, this young man is one of the best pure talents in the class. As a result, he is one of the top overall sleeper prospects to take notice of in the class, and is a sure-fire Division-I talent for the future.

A product of Canada, Maker moved to the state of Arizona less than (2) years ago, and has blossomed since coming to the state of Arizona. I followed Maker around this spring and summer, while he played for his club program, Team Harden 16U, and marveled at this young man's level of athletic talent and potential for the future. He consistently played at a very high level and turned in numerous strong performances against high-level competition for his age group. Maker is a well known name among basketball circles, and this young man is another version of an extremely talented family of prospects. His length and size, skill level and sheer athleticism are glaring attributes that suggest that he is a big-time talent for the right college program.

The Dream City Christian basketball program is absolutely loaded with national talent, so Maker has shared time this season with the program's National Team, as well as their local CAA high school team. As a result, he has not been able to raise his recruiting stock yet, but this is definitely one prospect that college programs need to take a very hard look at, as he is atleast a mid-major Division-I talent, and could absolutely blow up next spring and summer (2022).

Maker has excellent size and length on his rangy 6-7 frame, and an advanced offensive skillset that allows him to handle the ball in the open floor and make plays for himself and others. He is very skilled and can score from longer ranges with consistency and a pure shooting stroke, and also can create off the dribble, where he uses his extreme length and athleticism to float in the air and stretch out for lengthy layups and floaters. He finishes very strong at and above the rim, and has future NBA athleticism - able to finish high above the rim and over defenders. He is an excellent slasher and finisher in the halfcourt set and in the open floor, and is a very difficult player to defend for opposing defenders, as he can post up smaller players or take bigger players off the dribble. He also has excellent body control and can score with either hand effectively. Maker is a very good ball handler and also likes to create scoring opportunities with his ability to find the open teammates on the floor. A versatile prospect with a lot in his bag of tricks.

Maker is a good rebounder that uses his length and mobility to rebound outside of his area, and also uses his length to keep balls in play. A very good shotblocker with good timing, and a good defender that plays passing lanes quite well with good anticipation. Once he gets in the open floor, he can be a highlight reel, as he is able to dunk the basketball in a manner most prospects cannot, as a result of his length and athleticism.

Maker does not currently have a Division-I offer to his credit, but he is among the very best 2023 sleeper prospects in the West. While he may fly well below the recruiting radar for some time, once he gets his first offer, I would expect many to pour in for him, especially once college coaches get a chance to see this young man perform. He is a gym rat that loves the game, and thrives against better competition - a true gamer.

I will continue to follow Maker as a college prospect this season and into next club season, but expect this young man to become one of the hotter 2023 prospects in the class, as college coaches begin to know more about him. This is one of the better sleeper prospects I have ever seen, and I look forward to big things from him in the near future.