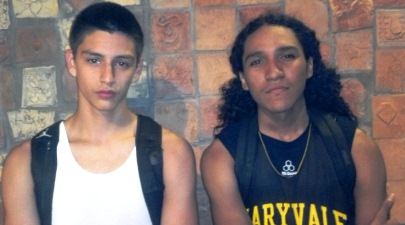 After a dismal first season at Maryvale High School last season (2-20) for first-year head coach Sebastion Payton, the Panthers will be back this season, and in a big way.  After a season where the team struggled mightily to win ball games and lacked the depth of talent to compete consistently last season, things have changed for Payton after a year of molding and teaching his players to play the game.

Payton, who took over a losing Maryvale program a year ago, was born and raised in the state of Arizona, and played his high school basketball in the late 1980′s and early 1990′s at Maryvale High School, after spending a season at North HS as a freshman.  Payton took over a struggling Maryvale program last season - a basketball program that had not won in some time.  Over their last two seasons under former head coach Tom Bendict, the Panthers posted an overall record of 21-31.

Payton’s understanding of the game though is immense.  As a former top performer himself, and, more importantly, someone who loves the state of Arizona and is engrained in the community, Payton is committed to developing young men and making them productive citizens of our community.  Payton’ style and tactics are definitely unique and his approach to the game are unlike many in the state, but his love and passion for the game is what has been needed to rebuild the Maryvale program.

Payton is from the old school, as he was developed as a youth by such legendary Arizona coaches as Royce Youree (East High) and the late Hector Bejarano (North HS).  He is a fundamental coach that teaches the game and expects his players to work hard on and off the basketball court.

While I had believed that Payton would turn around the Maryvale HS program quickly, he has done much better than that, as this season look for his program to be the most improved team in the state.

Maryvale will rely heavily this season on the play of superbly talented 6-foot-4 senior guard/forward Keshan Spears.  Spears, also referred to as "Kiwi," is among the most gifted talents in the state, and is a big-time sleeper prospect.  Last season on a team where he had very little help, Spears averaged 9.8 points and 4.3 rebounds per/game.  He had a big showing in last year's McClintock Holiday Shootout, where he poured in a team-high 16, 24 and 27 points in his team’s three games of the event.

Spears is a very skilled, big guard prospect that will be capable of playing either guard position on the floor at the collegiate level.  He has a high skill level and very good length for his size, as well as athleticism.  He is a very good shooter with nice range on his shot, and is able to score from anywhere on the floor.  He has a nice mid-range game and is able to score effectively off the dribble.  Spears is also a very good defender and has nice anticipation in the passing lanes.  He will need to add more size to his thin frame to maximize his potential for the collegiate level, but look for him to raise his numbers substantially this season.

Maryvale will also rely heavily on the play of another top-rated sleeper prospect - 6-foot-5 junior guard/forward Jorge Cano.  Cano, also known as "George," is a rare find among today's student-athletes, as he is very long and athletic.  George makes plays most players his size cannot, as he is very skilled - capable of scoring inside and out.  He is able to score off the dribble or from the perimeter with a sift shooting stroke out past three-point distance.  What makes him so intriguing as a prospect is his ridiculous length, which gives him the ability to finish at the rim easily with dunks after a slashing drive to the basket.

While George Cano was much younger last season, he has matured nicely and will be a major force this season for the Panthers.  Look for Cano to become one of the state's premier prospects among an already loaded 2014 class - a nice surprise for the state.

While Spears and Cano will definitely be the catalysts for the Panthers' team this season, and will be tough to match-up with for most teams, Payton is also excited about the emergence of a pair of guard prospects - 6-foot-1 senior guard Victor Bernal and 5-foot-10 junior guard Conrad Beltran.  Both guard prospects are sharp-shooters of the basketball and will apply strong defensive pressure.  6-foot sophomore guard Vicente Lujan is a well-put-together guard prospect that will step up his play and give the Panthers some depth this season.

The Panthers will be an explosive team on offense this season - looking to run every chance they get, and will apply strong defensive pressure for 94 feet.  This team will be fun to watch this season and will look to make a dramatic improvement from a year ago.

The Panthers will open the season on the road at Alhambra HS on November 20th.