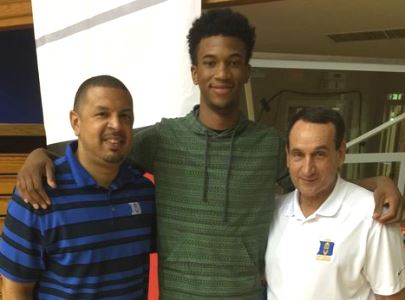 The wait is officially over for the nation's top overall basketball prospect and his family, as superstar 6-foot-11 sophomore forward Marvin Bagley Jr. and his younger star brother, 8th grader Marcus Bagley, have decided to transfer out of the state of Arizona - deciding to transfer to top-rated West Coast program, Sierra Canyon High School (CA).

Sierra Canyon is absolutely loaded already with talent and with the addition of Marvin Bagley, this team will look to rank as the #1 program in America.  While it is still unclear, Bagley should have to sit out until next season before playing at the program, after transferring this season already from Corona Del Sol HS and also Hillcrest Academy Prep.  At Sierra Canyon, Bagley will join other top-rated national prospects such as 6-foot-8 junior post Cody Riley, 6-foot junior guard Remy Martin and 5-foot-11 senior guard Devearl Ramsey.

For the state of Arizona, once again, we have lost a top-rated prospect from the state to a school or club program outside of the state.  This is a consistent pattern and it is very unfortunate.  A national talent such as Bagley only comes around once in a long time in a state such as Arizona's, and we may never see another prospect this promising.  There is no doubt that this young man will end up playing on TNT and ESPN in an NBA uniform in the near future, so, for the Arizona basketball community, we will need to remember the short time we had to witness this top-rated talent on the Arizona hardwood.  The next time we may see him compete in a true game in Arizona, may be for or against the Phoenix Suns.