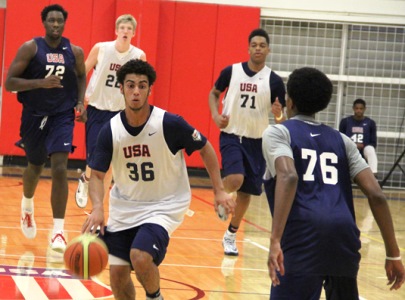 Here we go again.  In just as shocking fashion as when he committed to Arizona State last summer, and then also de-committed from the Sun Devils just recently, now Perry High School's electric 5-foot-10, 165-pound sophomore guard Markus Howard has also decided to leave the state of Arizona.

It almost seemed as just a matter of time for the explosive scoring guard prospect, who has been coveted over the past year by those in the state of Arizona, and definitely outside of it.  As a result of the pressure to play against the nation's best in a national schedule, and also the opportunity to develop against better competition daily in practice, Howard has decided to leave Perry High School and will now attend the nation's premier basketball program - Findlay Prep (NV).

The announcement came this week by Howard over Twitter.  A lot has changed for Howard in a short period of time.  Howard shocked the state last summer when he gave a verbal to Arizona State University - becoming the youngest prospect in the state's long history to give a verbal commitment to a division-I program.

Howard is among the top-rated 2017 prospects in the country, and since he re-opened his college recruitment, high major college programs across America have been in hot pursuit.  Such programs as Kansas, Florida, Arizona, Oregon, USC and UCLA are each again showing strong interest in Howard.

Howard is now also playing for the Las Vegas Prospects (NV) this club season on a loaded roster of future college prospects.  The Prospects recently signed a new contract with Nike, and have attempted to reel in many out-of-state prospects to their program.

Look for Howard now to exlode on the national recruiting scene, as he becomes a household name around the country.  Howard will have maximum exposure to college coaches, scouts and media, as he competes on the Nike EYBL circuit this spring, and also plays for the nation's premier high school program.  Howard's entire life looks to be changing quickly, and it will take an act of God to slow him down.

Arizona Hoop Review Scouting Report:   Howard is an electric scorer of the basketball with an exceptional handle of the ball and gifted physical strength.  His ability to score the basketball is very unique and he has never seen a shot that he does not like - a gift and a curse.  Very few players in America can score the basketball in the variety that he does, but he does need to focus on other areas of his game to maximize hsi potential as a player.  A strong ball handler that can get anywhere he wants to on the floor, and can create for himself and others - almost at will.  At this point in his young career, he looks for himself a lot, so he will need to continue to learn to make players around him better as a point guard for the next level.  But he is such a unique and high-volume scorer that he is very fun to watch perform in his element.  A good passer that sees the floor and is able to set up his teammates, when he wants to.  Has questionable shot slection.  A good defender, when he focuses in that area.  Should be much better defensively, since he has very good lateral quickness and court anticipation.  A big-time prospect at the guard position that will rank amongst the nation's top overall prospects.