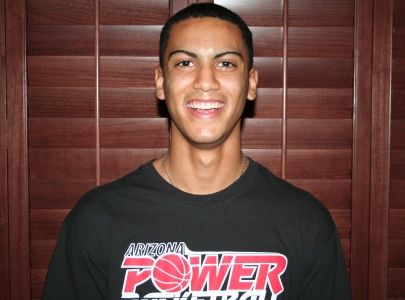 Arizona Preps' just learned of this development today through a post on Howard's twitter account.  Howard shocked the state last summer when he gave a verbal to ASU - becoming the youngest prospect in the state to give a verbal commitment to a division-I program.

While Howard's commitment to the Sun Devils was huge for the basketball program and the future of head coach Herb Sendek, his de-commitment could be just as important to the program and Sendek's future as well.  Howard is among the top-rated 2017 prospects in the country, and was also the top-rated Arizona basketball product to verbal to Arizona State since Jahii Carson in 2011, and the highest rated prospect to commit to ASU since Keala King and James Harden (NBA).

Howard was already being sought after by many high-major division-I college coaches around the country, before he verballed to Arizona State.  Such programs as Kansas, Florida, Arizona, Oregon, USC and UCLA were each showing strong interest in Howard early on.  Look for many college programs to now to begin to pursue him this spring and summer.

Howard has decided to play for the Las Vegas Prospects this club season on a loaded roster of future college prospects.  The Prospects recently signed a new contract with Nike, and have attempted to reel in many out-of-state prospects to their program.

After a tremendous freshman season, where Howard led his team to a Division-I state semi-final playoffs berth and earned First Team All-State honors, he returned this season as a sophomore and exploded for 32.4 points, 2.8 assists and 4.2 rebounds per/game.

It will now be very interesting to see how Howard's college recruitment quickly begins to develop, as he competes on the Nike circuit and on a loaded roster this club season.  Either way, the future looks to be extremely bright for Howard who has gained national attention, and should rank among the elite prospects and scorers in the country throughout his high school career, and among the 2017 class.

Arizona Hoop Review Scouting Report:   Howard is an electric scorer of the basketball with an exceptional handle of the ball and gifted physical strength.  His ability to score the basketball is very unique and he has never seen a shot that he does not like - a gift and a curse.  Very few players in America can score the basketball in the variety that he does, but he does need to focus on other areas of his game to maximize hsi potential as a player.  A strong ball handler that can get anywhere he wants to on the floor, and can create for himself and others - almost at will.  At this point in his young career, he looks for himself a lot, so he will need to continue to learn to make players around him better as a point guard for the next level.  But he is such a unique and high-volume scorer that he is very fun to watch perform in his element.  A good passer that sees the floor and is able to set up his teammates, when he wants to.  Has questionable shot slection.  A good defender, when he focuses in that area.  Should be much better defensively, since he has very good lateral quickness and court anticipation.  A big-time prospect at the guard position that will rank amongst the nation's top overall prospects.