Marin Takes Visit, On Another This Weekend 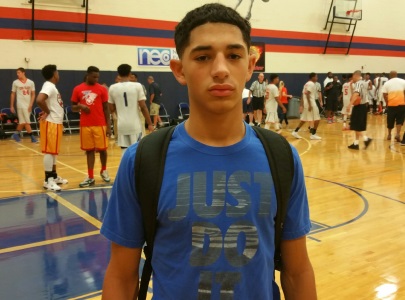 Share
Facebook Twitter LinkedIn WhatsApp Pinterest Email
One of the best available prospects in Arizona’s 2017 class took
an official visit recently, and has one coming up this weekend as well.
Apollo High School's 5-foot-11, 175-pound CG Dre Marin took an official recruiting visit to Idaho State University on September 24th through the 25th, a visit that went very well for him.  Marin is now on another recruiting visit this weekend to Southern Utah.
Marin should decide between these two schools, so a commitment should be coming soon for him.
Marin is above and away one of the best scorers of the basketball in the state, and has been proving that for years while playing on the club circuit.  A knock-down shooter from nearly anywhere on the court in a variety of ways (catch-and-shoot, off the dribble, curls, etc.).  Marin also has good leadership ability from the point position on the floor, and gets others on the floor involved during the right situations.  He is also able to really lock down on offensive
players and has quick hands, which he uses frequently to knock balls away and start fast breaks for him and his teammates.
We really look forward to watching Dre this upcoming 2016-2017 high school basketball season, as he and fellow teammates 2017 PG Holland “Boo Boo” Woods and 2019 wing Emmanuel Taban gear up for a deep run into the state playoffs this season.