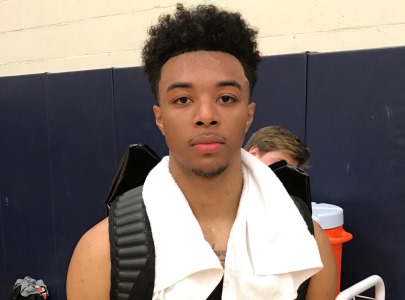 Shaver is an amazing get for the Portland staff, that already has a top-rated class of prospects coming in next season.  Shaver emerged this spring as the top overall unsigned 2017 prospect in the West, after his stellar performance in Las Vegas.  While playing in the West Coast Elite Unsigned Senior/JUCO Showcase event in Vegas during the second NCAA evaluation period, Shaver electrified the coaches, scouts and media in attendance with his superior overall play - turning in an amazing peformance that put everyone in attendance in amazement.

Shaver showcased his stellar physical frame, which he has developed through many hours of hard work with his personal trainer Sidd Sharma from Explosive Athlete Institute (EAI).  Shaver worked with Sidd for 4 years - throughout his high school career.

Shaver also showed off his superb ability to score and pass the basketball with excellent efficiency from anywhere on the floor.  Shaver scored almost at will against older competition and proved that he is almost unguardable one-on-one.

Shaver  originally signed this fall with UC-Santa Barbara, but when the current staff's contract was not extended, Shaver decided to re-open his college recruitment.  UC-Santa Barbara long-time head coach Bob Williams was released from his contract with the UCSB program at the end of this season.

In recent years, there have been numerous top-rated prospects that have signed college basketball scholarships.  This young man is one of those prospects that I really believe will make an immediate impact at the collegiate level, and, with continued hard work, will have an opportunity to play even further.  Shaver's commitment to his craft and level of excellence on the floor are glaring, and I have become a true fan of this young man's ability to play the game, and also how he carries himself off the basketball court.  There are no limits for Marcus Shaver.

Arizona Hoop Review Scouting Report:  Shaver is a big-time athletic talent at the guard position, and is capable of playing both guard positions, as a result, of his ability to score the basketball at a very high rate.  He plays above the rim in the open floor and is a superb athletic talent that has excellent work ethic on and off the basketball court.  A big-time scorer with the basketball in his hands, Shaver is able to make plays for himself and others almost at will.  A very good shooter of the basketball with excellent range on his shot, Shaver is difficult to defend one-on-one, as a result of his ability to score off the dribble and make plays in the paint, where he is an excellent finisher.  A very good rebounder for his size.  He pushjes the basketball on the break at a high rate and applies serious pressure  on opposing defenses.  An excellent on-the-ball defender that also plays passing lanes.  A potential lock-down defender at the next level. An excellent ball handler and passer that sees the floor.  An excellent sleeper prospect that should become an immediate contributor - regardless of the level he lands at.  Has gotten it done nationally against the countries top competition.