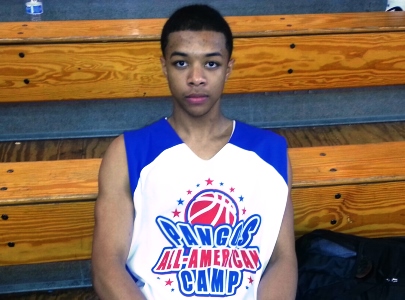 It was nice while it lasted - having talented 6-foot-1 sophomore point guard Marcus Shaver here in the state of Arizona for the past two years.  That time has come to an end, as the gifted 2017 guard prospect will now leave St. Mary's High School and will move to the state of Texas where, reportedly, he will land at Prime Prep.

Prime Prep is widely known in the basketball community as having one of the top prep programs in the country, in recent years, but the program has had numerous problems with the NCAA as well.  Recently, the program, which was created by former NFL superstar Deion Sanders, was investigated by the NCAA and received sanctions by the NCAA.  The school still has a basketball program, but it is currently unclear as to where their students attend classes or whether there will be issues with future course credits.

Shaver, a native of Hawaii, moved to the state of Arizona in 2013 and played for St. Mary's High School for two full seasons.  Shaver basically carried the team offensively, putting up very impressive numbers during both seasons.  Shaver was regarded among the elite prospects in the state of Arizona, and among the top underclassman guard prospects in the country.

Shaver averaged 23.3 points, 4 assists, 4.8 rebounds and 2 steals per/contest this high school season, while leading the Knights to a 17-13 overall record on the season and a strong finish to the season, where they eventually lost in the Division-I state playoffs to Chaparral HS (75-59).

There have been some rumblings from individuals close to Shaver and his family that Shaver had been told that he would have more help at the St. Mary's program, and that when it didn't happen, he decided to move to a different program.  An individual close to the family advised me that the plan was for superstar Marvin Bagley Jr. to come to St. Mary's, but Bagley decided to enroll at state basketball power, Corona Del Sol.

Either way, Shaver will now look to take his game to the state of Texas, where top-rated basketball prospects are very common.