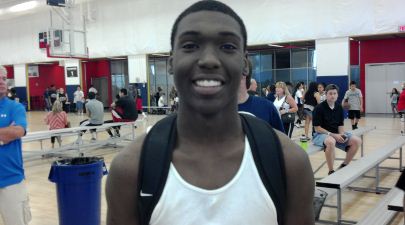 Desert Vista was led by the play of 6-foot-3 senior guard Avery Brunson with a game-high 25 points and 13 rebounds. Avery went to Marcos De Niza HS last year and was hearing it from the crowd, but actually carried the team during major stretches of the game.
Share
Facebook Twitter LinkedIn WhatsApp Pinterest Email

Desert Vista's 6-foot-3 senior SG Avery Brunson, who had transferred from Marcos De Niza during the summer, got things going with a 3-pointer for a 3 to 0 lead early.  Then 6-foot-4 senior SG/SF Richaud Gittens (Weber State signee) would hit a lay-up for a 3-2 DV lead.  Two free-throws were then made by 6-foot-3 senior SG Kyle Pittman to take a 5 to 2 DV lead, before another lay-up by 5-foot-10 senior PG Greg Carter for a quick 7 to 3 DV lead.

Then Marcos would get it going with two 3-balls by 5-foot-11 senior guard Stefan Tellis and 6-foot-2 junior PG Ty Lazenby.  After another shot made by DV's Carter, free-throws were then exchanged for a 10 to 10 tie.

After a very slow stretch for both teams, a 15-foot shot by Gittens would give Marcos a 15 to 12 lead.

Avery Brunson hit a free-thow and then a jumper for a 17 to 15 DV lead.  Then a jumper by 5-foot-9 senior PG Rahqir Wilson followed by a 3-point shot at the buzzer by Carter for a 20 to 17 first quarter lead for DV.

Points were coming fast in the next quarter as Ty Lazenby hit his third 3-ball of the game to tie it at 20 all.  Then on consecutive possessions, a 3-point shot by Gittens, a 3-pointer by 6-foot-3 junior SG Marshall Powell of DV and then a basket inside by 6-foot-3 senior Dominic Krane of Marcos would make defense in this game look optional.

A deep 2-ball by Brunson would tie the game at 25 all.

Krane then hit two free-throws for a 27 to 25 lead for Marcos.  Gittens then pulled up from three-point distance and hit, followed by another Brunson deep 2-point shot for a 31 to 29 Marcos lead.  Marcos' 6-foot-3 senior SG Devin White then slithered through the lane for a left hand lay-up for a 33 to 29 lead for Marcos.  Devin White would feel good and shoot another mid-range jumper for a 35 to 29 Marcos lead with 2 minutes left in the half - giving his team some breathing room.

Ty Lazenby made two free-throws for a 37 to 29 Marcos lead with 1 minute left in the half.  6-foot-1 junior wing Kelsey Trevino then hit a three-pointer of his own for a 40 to 29 Marcos lead, which was the biggest of the night.

Brunson finally stopped the bleeding for DV and hit two free-throws for a 40 to 31 Marcos lead at the end of the half.

Brunson had 15 points at the half for DV and Ty Lazenby had 11 points, while Gittens had 10 for Marcos.

Pittman would hit a three-pointer to start things off in the 3rd quarter, followed by 6-foot-3 senior forward Luke Lamb's three-pointer on the other end for a 43 to 34 Marcos Lead.  Gittens would then get an “and-1” for a 46 to 36 lead.

Brunson would hit a floater, and then hit again for a 46 to 40 Marcos lead, as Brunson was trying to bring DV back by himself.

Then Krane would score down low for a 48 to 40 lead for Marcos.  After a Gittens' free-throw, Lamb would then hit a lay-up from an amazing feed from Gittens - followed by a lay-up by 6-foot-2 sophomore wing Brandon Clark for a 51 to 42 lead for Marcos.

6-foot-4 sophomore PF Sean Wood would come down and hit a 15-foot jumper to make it a 53 to 42 Marcos lead.  A few free-throws were exchanged for a 54 to 43 Marcos lead with 1 minute left in the quarter.

DV would gain some momentum with 4 quick points from Brunson and Carter for a 54 to 47 lead at end of the quarter - setting the stage for a possible upset.

The fourth quarter started with a 56 to 49 lead, after a Gittens' tip-in and a Brunson shot.  Ty Lazenby then hit his fourth 3-pointer of the game for a 59 to 49 Marcos lead.

DV's Kyle Pittman then hit one free-throw, followed by a Brunson tip-in off a rebound.  After a pull-up 12-footer for Gittens, two more free-throws by Pittman would cut it to a 61 to 54 Marcos lead.

Brunson then hit a lay-up for a 62 to 56 Marcos lead with 4 minutes left to play.  DV's Brandon Clark then hit two lay-ups in a row bringing the Thunder to the closest they had been since the start of the game - a 62 to 60 Marcos lead with 3 minutes to go.

A turnover by Marcos would have head coach Dave Stark getting nervous on the sidelines.

DV's Greg Carter then hit a lay-up to tie the game up at 62 with 2 minutes left, as Desert Vista was on an amazing 8-0 run.

Then a beautiful pass by Gittens to set up Tellis for two free-throws after being fouled, made for a 64 to 62 lead.  But Carter would hit another lay-up for another tie game at 64.  Then Devin White's two-free throws would allow Marcos to go back up, 66 to 64.

Carter then got to the free-throw line himself and missed both attempts - then got a costly technical foul for taunting Gittens, as he fouled out with 1:38 left.

Tellis would hit both free-throws to take a 68 to 64 lead for Marcos.  Marcos would then convert 7 free throws down the stretch, and then a quick lay-up at the end of the game by Clark would give Marcos a 77 to 71 win.

DV fought hard on the road, but good teams find ways to win.  Marcos did just that-found a way to win.

Marcos was led by Gittens with 18 points and 8 rebounds and Ty Lazenby had 14 points and 4 assists.  A good balanced scoring in general as 6 players had 7 or more points for Marcos.

DV was led by Avery Brunson with a game-high 25 points and 13 rebounds. Avery went to Marcos last year and was hearing it from the crowd all game, but actually carried the team during major stretches of the game.  Greg Carter also poured in 17 points and 8 assists.  Also Brandon Clark scored 14 points in only 2 quarters of play.

Quick Hitters:  The DV freshman team (10-0) is undefeated with 6 very good players, and they play as many as 12 freshman with a loaded bench as well.

Marcos has 6-foot-2 freshman forward N’Keal Harry, who scored 31 points in the JV game for the win.  It was DV's first loss of the year for the junior varsity.