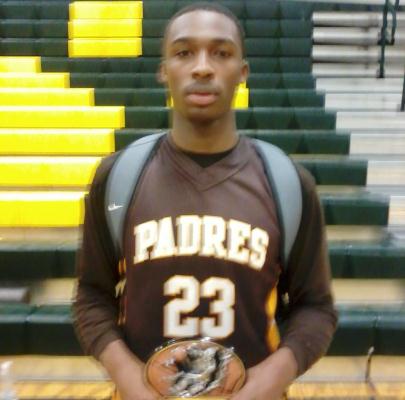 The game which would crown the consolation champion was a matchup between Arcadia and Centennial.  Arcadia was led by the second leading scorer of the tournament, 6-foot-1 junior Calvin Outlaw, who was averaging 28.5 points per/game coming in.  Centennial had a much more balanced attack, with multiple guys who could score.

Both teams came out pressing from the start.  The presses were disrupting both offenses and forcing turnovers.  At the four and a half minute mark of the first quarter, Arcadia head coach Stephen Danford received a technical foul, as he was arguing a foul.  It was that kind of game, with a lot of fouls on both sides.  This caused a lot of arguing, as a second technical was handed out to Arcadia - this one on Calvin Outlaw as the quarter wound down.

Despite the two technical fouls, a Malik Collins' offensive rebound and put-back at the buzzer made it a 16-13 Centennial lead after one.

Arcadia came out in a zone to start the second quarter, which had them closing out on shooters and making it tough on Centennial.  Arcadia then called a timeout at the six minute mark to discuss offense - as it led to a quick 7-0 run to take a lead.  This forced a Centennial timeout at the four minute mark.

The rest of the quarter was back and forth.  It was sloppy, with a lot of fouls called, and both teams being in the bonus midway through the quarter.  A long second quarter wrapped up with a 35-35 tie game.

Malik Collins made his presence known in the first half - scoring 6 points and collecting 9 rebounds for Arcadia.  Sanders Swatzell had a game-high 12 at the half.  For Centennial, Joe Maish scored 10 points and had 6 rebounds, while Shawn Poindexter had 4 points and 6 rebounds.

Neither team seemed to want to take control in the first half.  This was a game set to have a great finish.  The third quarter started out fast-paced.  Joe Maish picked up his fourth foul, and had to leave midway through the quarter.  A back and forth game brought some more frustration, as Shawn Poindexter picked up a technical foul for Centennial with three minutes left in the third quarter.

Arcadia went into the final quarter clinging to a 53-51 lead.  Three minutes into the fourth, Centennial picked up their second technical, as head coach Michael Gahan said a little too much.  Arcadia hit their free throws to take a three point lead.

With three minutes left, the Titans started to play keep away with a 62-59 lead. It worked well, until Centennial got the ball back with two minutes left and scored on the possession to make the score 64-61.  Malik Collins was fouled and went 1-for-2 at the line to make it a four-point lead.  Centennial then scored with 45 seconds left and fouled Agazi Yohannes who made one of two from the line.

Down three, Xavier Villanueva missed the game-tying three-point attempt, however Shawn Poindexter got the offensive rebound and hit a fade-away three to tie the game - leaving four seconds.  A half-court miss by Swatzell meant overtime.

A four-minute overtime was set to what would be a good ending.  After Calvin Outlaw hit one of two free throws, Sanders Swatzell hit a three on the following possession to emake it a four-point lead.  Poindexter and Outlaw than started trading buckets, as they each scored on the following four possessions.

With one and a half minutes left, Centennial called a timeout down 75-72. They were unable to score and had to foul.  Down the stretch, Arcadia made their free throws and held on to beat Centennial 82-72.

The game opened up with a 7-0 run, led by their defense.  They were in a zone, which stopped the Peoria penetration.  Too much one-on-one offense by Peoria had them struggling early.  They were able to score a couple buckets late to make it a 10-6 game after one.

The second quarter started with a quick Peoria bucket to cut the lead to two, however SCA than scored 10-straight points to force a timeout with three and a half minutes left until halftime.  The slow-paced, low scoring game was a 20-12 lead for SCA at half.

In a low scoring game, SCA was led by Cavin Sherman’s 7 points, and Jared Frame’s 5 points.  For Peoria, Jaleel Nasir had 3 and Nate Jenkins scored 4.

The third quarter came and SCA continued to hold the lead.  Two 3-pointers in the quarter by Jared Frame helped to extend the lead, however Peoria kept the game within reach.  A Toby Gamble buzzer beater pull-up made it a 31-21 score heading into the final quarter.

The fourth quarter was a back-and-forth defensive game.  SCA would not let Peoria cut into the lead.  With three minutes left, the Panthers fought their way back, cutting the lead to five - 38-33.  However, SCA was able to hit their free-throws late and hold on to win 42-38.

Peoria was led by Jaleel Nasir’s 17 points and 6 rebounds.  Toby Gamble provided a spark off the bench, with 5 points and 5 rebounds.  For SCA, Jared Frame scored 12 and hit three 3-pointers, and also collected 6 rebounds. Cavin Sherman scored 11 for SCA in the win.

The tournament champion would soon be crowned, as the host team Horizon Huskies took on the Marcos De Niza Padres.

Horizon was led by a team effort, with Sean Deacon at the head of it.  Deacon had double-digit rebounds for the tournament, as well as a double-double in their first game.  However, Marcos had 6-foot-4 senior Richaud Gittens (Weber State signee), the tournament scoring leader and dynamic shooting guard.  These two teams each had different styles, as Horizon likes to slow it down and limit possessions, while Marcos likes to force turnovers and get out in break.

The game opened up with Gittens being aggressive.  He helped fuel a 14-6 run to open up the game and force a Horizon timeout with three minutes left. Marcos De Niza’s press was forcing Horizon into facing pressure, which made them uncomfortable.

The first quarter ended with a Brandon Burke buzzer-beater to make it a 23-13 Padre lead.  Although they were down, Sean Deacon was solid in the first quarter - scoring 6 points and collecting 3 rebounds.  Despite his good start, Richaud Gittens had a better one, with 6 points, 5 rebounds, and 2 steals.  The Padres hit (4) threes in the quarter.

The second quarter came out with Marcos getting out in the break.  Back-to-back steals and assists by Tyler Lazenby for Richaud Gittens' finishes was exactly what Marcos De Niza wanted to do.

Despite the Padres early run in the quarter, Horizon had an answer, as they were able to keep the Marcos lead at 13 at halftime, 42-29.

Sean Deacon continued to play well, scoring 9 points and collecting 5 rebounds for Horizon.  Austin West also had 6 points and 3 rebounds.  For Marcos, Gittens had 13 at the half, as well as 6 rebounds.  Stefan Tellis was shooting the lights out - hitting (4) threes in the first half and scoring 14 points.  Tyler Lazenby also had 7 points and 4 assists.

Horizon would need to come out strong to start the second half to stand a chance.  However, just the opposite happened.  Marcos De Niza went on a 10-2 run in two minutes to start the quarter - forcing a Husky timeout.  At this point, the Padres had taken over the game, and finished the third quarter up - 66-39.  They outscored Horizon 24-10 in the quarter to help cement the championship.

The final score ended up 81-53, with the Marcos De Niza Padres all over Horizon.  Sean Deacon was the leader for Horizon, getting his second double-double of the tournament.  He had 16 points and 10 rebounds.  Austin West contributed 6 points and 4 rebounds, while Brandon Burke had 9 points - all on three pointers.

For Marcos, the tournament scoring leader, Richaud Gittens, had 20 points and 7 rebounds.  6-foot-3 senior guard Devin White had 21 points on (3) three-pointers, and Stefan Tellis hit (5) threes in the win.  Tyler Lazenby did a great job in the point - scoring 10 points, dishing out 5 assists and collecting 4 rebounds.  Marcos hit (11) three-pointers as a team, which made them unstoppable in victory.

Marcos De Niza showed domination from their opening game.  Horizon did a great job representing themselves as the host team and getting to the championship game.