Maper Maker Is As Big As It Gets 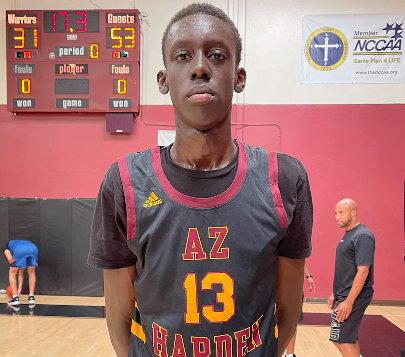 One prospect that resides in the state of Arizona is bigger than any other prospect in his class, and will have big-time college recruitment very early in the recruiting process is Dream City Christian Prep's 7-foot rising freshman post Maper Maker. A mere member of America's 2025 Class, Maker is as big as it gets - physically and in his future college recruitment. This young man came to the state last summer, and has already made tremendous strides as a player and as a college prospect. While most scouts, media and college coaches have not seen this young man yet, he is as good a prospect as there is in America, and will make loads of noise nationally with college programs.

Maker's last name is very well known in basketball circles, as he is related to NBA player Thon Maker. While many know the last name, Maper is an even bigger talent than Thon was, and will have a much brighter future ahead of him over time. This Maker is a true 14-year old, which is insane, and he has loads of upside for the future - as much upside as I have ever seen in a basketball prospect. He is already 7-foot in height, and he hasn't even checked into the high school ranks as of yet. Absolutely unreal. Maker is still growing as well, and he has grown 2 -3 inches, since I last saw him in June (2020), at the Pangos Best of Arizona Summer League. His upside and potential for the future are as high as any prospect in the country, as he could grow another 2 -3 inches over time. Scary.

Fellow local 2025 superstar prospect Koa Peat is a tremendous talent also, and has received rave reviews over the past year, which has resulted in major early stardom for the young talent. Imagine how amazing the reviews will be for Maper Maker, as the national basketball community catches a glimpse of him. Maker is a sure-fire Top 5 national talent in America's 2025 Recruiting Class, and I can't imagine a better prospect nationally. Ohio's Jerry Easter, Peat and Maker are my top (3) 2025 prospects nationally, but I believe Maker to be the best and most glaring prospect in the class.

Extremely rare is it that you see such a promising and large prospect. But Maker is not just large in size, he is also agile, skilled and runs the floor like a guard. On Saturday, while watching him in a game in the Adidas Get Em Up Invitational, Maker ran the floor very hard and finished numerous plays well above the rim. He dunked the ball over defenders, and finished with his entire arm over the rim in transition. Inside the paint, he mixed it up and played big - blocking and changing shots at a high rate, and also finishing strong at the rim and around the basket. He will surely develop a great deal over the next four years of high school, as he has shown excellent promise already in the last year.

Maker has already received an offer from the University of Oregon, and it is just a matter of time when every high-major Division-I program in America will be in pursuit of this young, budding talent.

Maker, while only an incoming freshman, will play this July with Team Harden 16U. Maker's club team, which has dominated the events they have played in for some time now, has changed names. Formerly known as Zone 6 and playing at the 15U level, the team now will wear Team Harden uniforms and compete at the 16U level. While they are very young, they should make the transition nicely - simply because no one else has a Maker. I will enjoy following the team to see how they fare against older competition, and watching the soaring rise of Maker as a college prospect.

Arizona basketball is in excellent shape, as a result of so much young talent. Both Maper Maker and Koa Peat remind me of the former dynamic duo of DeAndre Ayton (Phoenix Suns-NBA) and Marvin Bagley (Sacramento KIngs-NBA), as both competed at Hillcrest Prep together and then went #1 and #2 in the NBA Draft. These two prospects may not play on the same team or program, yet, but it is going to be exciting to watch them both develop.