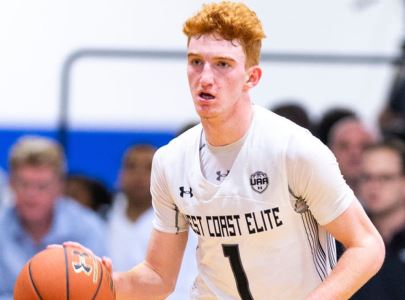 It is very hard to believe that the storied high school basketball career of Pinnacle High School's superstar guard Nico Mannion is already winding down, but the 2018-2019 high school basketball season will now be the last one for Mannion, after he recently announced that he would leave the 2020 class, and become a member of America's 2019 class - graduating a year early and moving on to the collegiate ranks.

Former Arizona star guard guard Matt Carlino (Marquette, BYU) of Highland HS did the same thing years ago, and signed with UCLA out of high school a year earlier, before eventually transferring to BYU and finishing his career at Marquette.  Like Mannion, Carlino was a little older, so the move made sense for Carlino and it does also for Mannion.  Can you really imagine the dominant Mannion actually playing two more years in the Arizona high school ranks?  I cannot.  After leading his Pinnacle program to an impressive 6A State Championship last season as a sophomore, Mannion will absolutely destroy the state's competition this high school season.  Watching Mannion travel around the state like a rock star each game this season, in front of large crowds, will be a site to behold and absolutely fun to watch.  Watching it for two more high school seasons would too much for Mannion and his family, and difficult for Arizona basketball enthusiasts to also watch.

Mannion does not clearly have a leader in his college recruitment, but this summer he did narrow down his list of schools to 10 college programs that he will choose from this fall.  Mannion has trimmed his list of schools down to Villanova, Duke, Vanderbilt, Utah, Marquette, USC, Arizona, UCLA, Oregon and Kansas.  Mannion should soon be narrowing this list again, and will expect to take official visits this fall before making his college decision.

This club season, which included the spring and summer, was a big one for Mannion, as he traveled the country and even the world, and faced high-level competition at each stop.  At each stop though, Mannion was his usual self and his competition did everything they could to slow him down, but failed.  Mannion has become a basketball legend of sorts around the country, as the nation's basketball community of scouts, media and fans have gathered to watch the redhead kid get busy, and he has never disappointed.

After dominating his competition on the Under Armour basketball circuit last spring, Mannion then took his game to his native country Italy, and played at his usual high level against world competition.  He then returned back to the state's this summer to get back to business on the club circuit with his loaded West Coast Elite program, organized by Ryan Silver.  This week, Mannion can be seen all over the internet dominating fellow national prospects at the Steph Curry Basketball Camp, as he won the 1-on-1 King of the Court competition at the camp.

Whatever Mannion does, it seems to work out at a high level and also just adds to the reputation and legend of this amazing guard prospect.  Hard to believe that this will already be his last season of high school basketball, but it will be.  This summer's performance will also be the last one as well.  We will not see Mannion on the AAU/club circuit next spring or summer - this high school season will be it.  Mannion's high school basketball career has been well orchestrated and organized for him to be successful, and those close to him have done a magnificent job of organizing his schedule and keeping him fresh and not allowing him to play in too many events.  He has been marketed and has delivered at the highest level - now making his legacy one to remember forever.

I, for one, will make sure to take it all in this high school season, as Mannion does his thing one last time.  Like watching DeAndre Ayton (Phoenix Suns) in his last season at Hillcrest Prep, I will watch Mannion closely and relish it, knowing that the next time he will put on another uniform, other than the Pinnacle one, will be at a high-major division-I institution on national television.