Mannion Turns In Epic Performance In Win Over SJM @ HoopHall 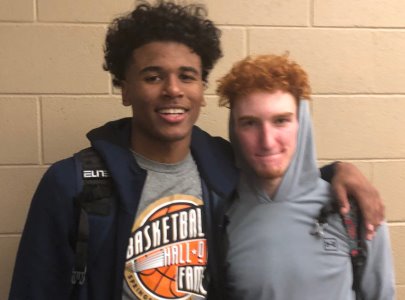 This year's amazing HoopHall West event kicked off on Thursday evening on the campus of Chaparral High School, an excellent annual venue for this colossal event.  The featured game of the evening was a major one and was featured on ESPN 2 on national television, as the nation's top junior prospect, 6-foot-6 junior wing Jalen Green faced off against one of the nation's elite overall prospects, 6-foot-4 senior guard Nico Mannion.  The two future pro prospects absolutely went off in front of a large crowd of media and scouts - both pouring in a game-high 33 points, but it was Mannion's performance that would be one to remember, as he led his Pinnacle team to the big 90-69 win on the evening.

Mannion originally was a member of the 2020 class, before he decided to reclassify to the 2019 Class, and sign a national letter of intent to play at the University of Arizona.  When you consider that we really saw two highly rated members of the 2020 Class on Thursday evening going at it, it really made you wonder, but Green is a young 2020 prospect, and Mannion was an older 2020 prospect, so it was about right in the end.

While the two highly-acclaimed prospects were both spectacular on the evening, as both performers dunked the ball in fine fashion, knocked down numerous three-pointers, slashed to the basket and finished and displayed a slick ball-handling skill-set, it was Mannion that completely separated himself in this game, as he made his teammates convincingly better in the huge win.

Mannion would pour in a very amazing 20-point effort in the game's first period, as he would come out firing on all cylinders, and begin the game as hot as I have seen a player early on - especially in a game of this magnitude.  Green would actually start the game in the first few seconds with an impressive dunk in transition, but immediately Mannion answered the bell, and began orchestrating his team's offense - creating and converting scoring opportunities for himself and his teammates.  Mannion seemed to find every open teammate on the floor, and his teammates rewarded him all game by complimenting his extreme unselfish court vision with high-percentage shots.

Most impressive was that this performance by Mannion was immediately following his team's big road loss on Tuesday evening at Mountain Pointe HS.  Mannion and his teammates regrouped as a winning team should, and came back stronger against one of the nation's top high school teams.  Another lesson for other Arizona high school programs, and actually anyone that plays sports.  Losing or even failing defines us and shapes us.  How we bounce back is the true lesson learned.  Don't get your head down, simply go back to the lab, re-evaluate and come back stronger.  Mannion and the Pinnacle team, led by veteran and highly successful Head Coach Charlie Wilde, definitely did that, and made Arizona very proud on Thursday evening.

Mannion's overall performance was nothing short of epic on Thursday evening, as his legend in Arizona basketball continues to develop and grow.  Recently, the state of Arizona has produced some serious high-level talent in the high school and prep school ranks, and Mannion currently carries the torch in our state, which is now completely loaded with superb basketball talent.  This is one performance though that will be remembered for a long time, as Arizona basketball continues to blossom.