Main Event Has Interesting Plot With Team Harden 16U Victory 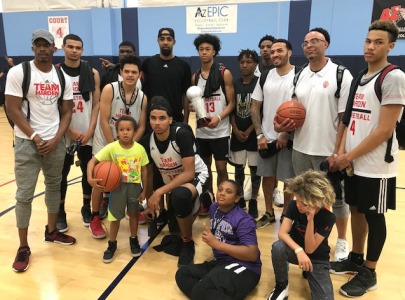 The Southwest Showcase Main Event took place this weekend - kicking off the start to the 2018 club season in fine fashion, once again.  With the majority of the state's top club programs in participation this weekend, from many different age groups, and also many teams from outside of the state, this year's event was very exciting for players, fans, scouts and media to attend.  Hard-working and focused Tournament Director Ron Coleman has been putting on major club events for many years, for both boys and girls, and this event may have been his best ever, as it was comprised of 194 different teams in participation over the weekend.

The event had an interesting plot, as the Team Harden 16U team, comprised of mostly sophomore prospects, won the top division of the event - the 17U Platinum Division.  While it may have taken some of the luster from the event, hypothetically, when basketball enthusiasts around the state consider the fact that a 16U team won the top 17U Division of the tournament - this team was loaded with talent.  Led by the play of skilled Chaparral HS 6-foot-4 sophomore guard Xavier Dusell, who turned in his best effort of his young career, this team shocked those in attendance with a come-from-behind victory over a talented team, known as The Factory.  After being down by as many as 20 points in the game, Team Harden would storm back in the game behind the play of Dusell, who would explode in the final stages of the game.  Dusell's performance was almost epic, as he displayed an ability to play the game that we have not yet seen from him on the big stage, until this year's Main Event.  Dusell earned Tournament Most Valuable Player honors from our staff after his dominant effort in the tourney.

The Harden team was also led by the play of Cesar Chavez's dynamic sophomore duo of 5-foot-10 guard Riccardo Sarmiento and 6-foot-2 guard TyTy Washington.  Washington would not finish the event after suffering an injury (concussion) on Saturday, but in his absence, Sarmiento took over a scoring role while leading the team from the point position.  Sarmiento came up big in his true coming-out-party at the high school level.

The team also received strong play from 6-foot-3 junior guard Vean Simon in the event, also his best tournament performance of his young career.  I was very impressed with Simon's ability to play both ends of the floor at a very much improved rate in the event.  He may have been the best defender in the event from the guard position.  He was definitely in the conversation.

The Harden team was very impressive in their tournament victory, but the win left those in attendance for the game wondering whether Team Harden had proven to be a considerable opponent, or had the tournament missed out on the state's elite 17U teams?  With the top Arizona 17 & Under teams from Team Harden, Powerhouse Hoops and a loaded Jamal Murray Elite team sitting out the event, the event missed out on a lot of top-rated talent in the division.  The state is absolutely loaded with basketball talent these days, and each of these three teams would have brought a lot to the event.  Instead, Team Harden 16U proved to be more than worthy of the test - playing up in the event, and proving that they are ready for the spring's Adidas Gauntlet.

In the actual 16U Division, superstar 6-foot-10 sophomore wing Shon Robinson proved to be the top overall player and prospect in the event.  Robinson led his Jamar Murray Elite team to the tournament championship in fine fashion - displaying unique level talent and athleticism.  His size and mobility are glaring and remind you of the past days of current NBA player Richard Jefferson.  Robinson is already a big-time recruit for college programs, and this weekend he showed the potential that will have college coaches drueling over him.

The combination of Team Harden 16U winning the Main Event and also Shon Robinson starring in the tournament, it proved what we already knew, which is that the state of Arizona is now absolutely loaded with talent.  The event was also filled with spectators of all age groups - a very nice environment to watch a basketball tournament.  I look forward to many more Main Events in the future, and expect this tournament only to continue to grow and blossom over time.  A job well done by Tournament Organizer Ron Coleman.