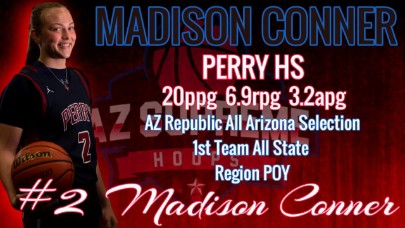 AZ Compass Prep’s 5-foot-11 senior guard Madison Conner (University of Arizona commit) is among the nation's top overall talents, and she has been for some time. The very gifted and skilled guard prospect has had a tremendous high school career, and is now preparing for her final senior season, where she will hope to lead a loaded AZ Compass Prep program that is is filled with talented prospect, many from different schools.

Conner has had a terrific high school career for herself, becoming a star basketball prospect before even entering her high school career. As a mere freshman starter for Perry High School, Conner received an offer from University of Arizona Head Coach Adia Barnes, an offer that she could not pass on, as the terrific guard prospect gave the Wildcats her commitment - the first in the 2021 Class for the Wildcats.

Conner is well received nationally as well, as she has been rated as the #71 overall 2021 prospect in the country by ESPN. She could even be rated higher, had her spring and summer not been cut short by COVID. She is a superb talent with the basketball in her hands, and should have a huge senior season.

Conner will look to Now have a big senior season, but now for AZ a Compass Prep, after making the change in schools after her junior season. She is among the most skilled and talented girl's prospects I have ever seen in the state. She has a pure shooting stroke with unlimited range on her shot, which allows her to score off the dribble and also catch and shoot at a high clip. She has a very good mid-range game, and is able to make plays for herself and her teammates off the bounce, which is a very nice aspect of her ability to create and make plays. Her shot is pure and has a quick release on it, which allows her to keep her defenders off balance.

Conner is a do-it-all guard prospect with excellent versatility as a player. She does it all for her team to win and plays with a purpose. She is very similar as a player to her future college Head Coach Adia Barnes at University of Arizona, as Barnes played in the WNBA - something that Conner would also like for herself and her future.

Conner is a true competitor and also competes on both ends of the floor. She is a strong rebounder from the guard position, and has very good physical size in her college-ready body. She is also a good defender and plays passing lanes. She will need to continue to focus on this area of her game to maximize her potential as a player in the future.

Overall, Conner is another top-rated girls prospect in the state, that is helping raise the level of basketball in Arizona.