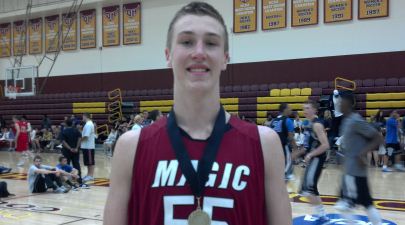 Recently, it was reported that Westwind Prep Academy 6-foot-9, 235-pound junior post Connor MacDougall (Arizona State commit) had left school - leaving Westwind Prep for undisclosed reasons.  While we are unable to report the reasons for MacDougall leaving Westwind's basketball program at this time, in fairness to he and his family, MacDougall will now look to pick up his academic and athletic future again next year and another program.

MacDougall's desire to leave the Westwind program had nothing to do with Westwind Prep's academics or basketball program - in fairness to the school and their coaching staff.

According to MacDougall's father, Lonnie MacDougall, his son is currently looking to improve his academic performance in the future, and is also still unclear as to where he will land for his senior season of high school.

MacDougall had transferred to Westwind Prep Academy this year as a junior, after leaving Desert Vista HS after two years at the school.  MacDougall improved as a player and as a college prospect a great deal in less than a year at Westwind Prep - enough to land him a scholarship offer from the Arizona State Sun Devils in the fall.  MacDougall recently gave an early and surprising commitment to the Sun Devils in October of 2012.

MacDougall is currently rated among the elite post prospects in the West for the 2014 class.

Arizona Preps will continue to follow this story as it continues to develop, and bring you any updates as they continue to develop regarding MacDougall's future high school program.

Arizona Hoop Review Scouting Report: MacDougall continues to impress at a high level after a strong 2012 spring and summer performance on the AAU/club circuit.  MacDougall looks as a high-major post player should look physically and he has the athleticism and toughness to go with it.  MacDougall runs the floor very well for his size and is a strong finisher on the low block.  He does not shy away from physical contact.  In fact, he relishes it and he uses his large physical frame to gain good inside post position and make plays inside the painted area.  A good scorer on the low block with a soft touch out to 15-18 feet.  Plays like a big and enjoys scoring around the basket.  Also a strong rebounder and a capapble shotblocker, MacDougall is capable of playing either the 4 or 5 positions on the floor.  Has some upside still as a player and is still growing.  An excellent post prospect.  Committed to the Arizona State Sun Devils.