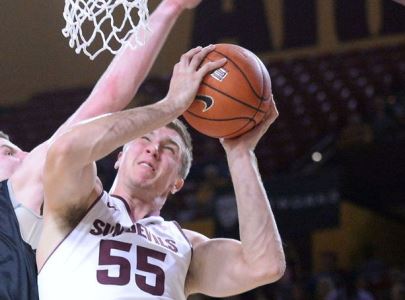 Former Corona Del Sol High School graduate and Arizona State transfer, 6-foot-8, 220-pound freshman post Connor MacDougall saw very little playing time during his freshman season for the Sun Devils.  As a result, MacDougall decided to transfer from the PAC-12 program and has landed at a local junior college program in the ACCAC.

In case you missed it, MacDougall has decided to transfer to the junior college ranks and will play his sophomore season for South Mountain Junior College next season.  At SMCC, MacDougall will look to regain the form that made him a once very attractive post prospect to division-I college programs.

MacDougall was a very seldom used player for ASU last season, only playing a total of 23 minutes on the season, before a season-ending injury caused him to miss much of the season before deciding to leave the team and transfer schools.

The main reason for MacDougall landing at SMCC was due to his close personal relationship with Arizona Power club coach John Ortega, who is now an assistant coach for the South Mountain men's basketball program.

Immediately, MacDougall becomes a very high-profile transfer into the ACCAC and gives the conference a top-rated post prospect for college programs to recruit next season.

MacDougall chose to commit to the Sun Devils in high school as a mere junior, and after heavy interest from a large numbers of programs.  While a junior prospect at Westwind Prep Academy and while playing for then head coach Jeff De Laveaga with Westwind and also the Arizona Magic club program, MacDougall received scholarship offers from such programs as New Mexico, Oregon State, Cal, Portland, Utah State, Utah, Northern Arizona, Colorado, Saint Mary's and Boise State.

Look for MacDougall to become a dominant post prospect for SMCC next season, and become one of the hottest overall prospects in the conference next season.

Arizona Hoop Review Scouting Report:  MacDougall looks as a high-major post player should look physically and he has the athleticism and toughness to go with it.  MacDougall runs the floor very well for his size and is a strong finisher on the low block.  He does not shy away from physical contact.  In fact, he relishes it and he uses his large physical frame to gain good inside post position and make plays inside the painted area.  A good scorer on the low block with a soft touch out to 15-18 feet.  Plays like a big and enjoys scoring around the basket.  Also a strong and active rebounder.  Runs the floor hard.  A  capapble shotblocker.  MacDougall is capable of playing either the 4 or 5 positions on the floor.  An excellent competitor.